Its only three weeks to go before many of us descend on the NEC in Birmingham for the Who Do You Think You Are? Live show.

One of the most interesting parts of this event are the number of fascinating talks given both on the stands and in the various Society of Genealogist workshops around the hall. They can open up your mind to new places to look for your ancestors or give you tips and tricks to use that you hadn’t considered before.

The Society of Genealogists will be running an extensive programme of workshops by leading genealogists over the course of the three day show. You can choose from a vast number of subjects, for instance: different research techniques, how to record your findings and using parish registers.

Taking place in four theatres (SOG Studios 1, 2, 3 and 4), sessions last for approximately 45 minutes with a fifteen minute break in between. All workshops are free to attend* and subject to capacity – for this reason, you are able to pre-book a seat at your preferred workshops for just £2 when booking your tickets to the show.

Heading over to TheGenealogist’s talks stand, that on the plan is near the entrance of the hall, I am looking forward to the Tracing Military Ancestors with Chris Baker, Military Expert & Author, Breaking Down Brick Walls with Mark Baley, Online Expert and Celia Heritage talking about our Ancestor’s Working Lives.

Like many, I have been fascinated by the reports in the media lately regarding the finding of Richard III’s remains in the former Greyfriars Church in Leicester.

I was a student in Leicester in the early 1980’s. So it was that I walked past the rather nondescript area where King Richard III was buried on a daily basis on my way to and from lectures and never for one instance thinking of the historical importance of the church that had stood there before.

On my most recent visit to the city, back in January, I was aware of the excitement that was building around the find at Greyfriars car park and picked up some leaflets at the tourist office on the subject. Then this week the world’s media covered the announcement that it was “beyond reasonable doubt” the skeleton of the monarch. 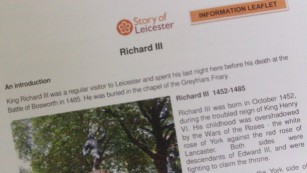 From my point of view, as a family historian, one of the really interesting things was the use of DNA from a descendent of the dead king’s sister to reach this conclusion.

The team from Leicester University had turned to the historian and author John Ashdown-Hill. Back in 2004 he had been able to tracked down the late Joy Ibsen, a direct descendant of Richardâ€™s sister Anne of York and from her to the Canadian born Michael Ibsen, a cabinet maker in London.

Again, of interest to us family historians, is what John Ashdown-Hill said on the BBC’s Radio 4 “Today” programme

On the Who Do You Think You Are Magazine’s website it is reported that the team did not rely on just the one line from Anne of York down to Joy Ibsen, as is the impression gained from some of the media reports this week.

Not only did the genealogists find documentary evidence for each â€˜linkâ€™ of the chain between Anne of York and the late Joy Ibsen, but they were able to make contact with a second maternal line descendant â€“ who wishes remain anonymous â€“ whose DNA was used to confirm a match between genetic material extracted from the skeleton and a swab provided by Joyâ€™s son, Michael.

â€œRight from the start of the project, we did not want to rely entirely on the DNA between Michael and the skeleton. We always wanted to triangulate that wherever possible,â€ explains Professor SchÃ¼rer. â€œWe set about trying to secure a second maternal line, and after several weeks of research we actually did discover this person. The documentary evidence again is there to support this.â€

In a couple of weeks the Who Do You Think You Are? LIVE show will be at Olympia and already they have moved the talk by Dr Turi King called “Discovering Richard III” from a smaller area to now be held in the Celebrity Theatre / SOG studio 1 on Saturday, 1.00pm â€“ 1.45pm.

It is billed as telling the story of the research project undertaken at the University of Leicester to discover the burial place of Richard III and the related work to scientifically identify the skeletal remains.

Personally I can’t wait for this year’s WDYTYA? LIVE as I missed last year due to fog disrupting my travel plans!

Sign up now for my FREE English and Welsh family history tips by email..