While previously researchers were able to view the georeferenced Lloyd George Domesday Survey Data Layer of maps and also see the sites of UK War Memorials, cemeteries and churchyards from across the country, TheGenealogist has now added the fascinating Booth Poverty Maps of London 1898-1899 to this useful resource. 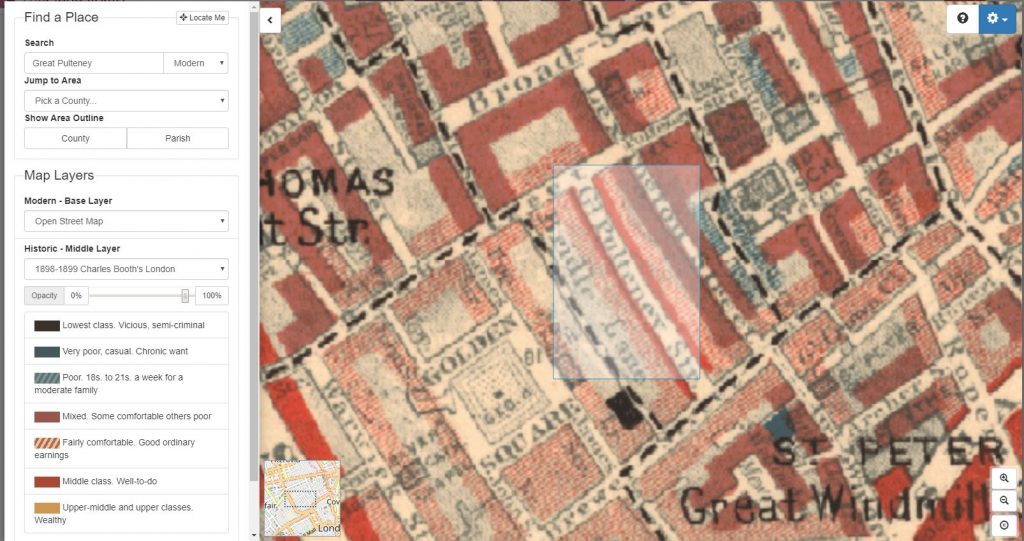 There were seven classifications detailed on Booth Maps ranging from the lowest to the wealthy. Those streets coloured black were for the ‘Lowest classes. Vicious, semi-criminal’. Next was dark blue for the ‘Very poor, casual. Chronic want’. This was followed by light blue to indicate ‘Poor. 18s to 21s a week for a moderate family’. Streets in purple indicated ‘Mixed. Some comfortable others poor’. Those roads in pink were ‘Fairly comfortable. Good ordinary earnings’. Red designated a street inhabited by the ‘Middle class. Well to do’, while yellow the ‘Upper-middle and upper classes. Wealthy.’

Diamond subscribers to TheGenealogist are able to use the interface by clicking on the large map of England, Scotland and Wales on the main search page.

The next screen allows the researcher to enter major street names or an area so that you can browse the locality.

In the recent BBC 1 Who Do You Think You Are? episode, Oscar winning actress Kate Winslet was researching her 2x great-grandfather, a Swedish born tailor, who lived in Great Pulteney Street, Westminster. Using this example we start typing Great Pulteney into the search box. We are presented with a choice of two from which we select the one that is in the City of Westminster, Greater London. Under Map Layers we chose the ‘Historic – Middle Layer’ and here select the ‘1898-1899 Charles Booth’s London’ from the dropdown menu. This will now highlight the street on the map.

TheGenealogist’s powerful Map Explorer has been developed to view these georeferenced historic maps overlaid on top of modern background maps including those from Ordnance Survey and Bing Street maps, as well as a satellite view. With the Map Explorer you can search for an ancestor’s property, discovering its site, even if the road has changed or is no longer there.

See the featured article on Kate Winslet’s episode of Who Do You Think You Are? where she makes use of the Booth Maps in her research.

Find out more at TheGenealogist.co.uk/maps/