My research this week has hit a number of the inevitable brick walls that most family history researchers find litter the path to seeking out our elusive ancestors in the records.

I know just how frustrating it can be when we are trying to add people to our family tree and the wretched people just don’t seem to be anywhere to be found.

If you find yourself in that situation then my advice to you is, 1 – Don’t panic! 2 – Take a deep breath and 3 – Take a step back.

I was asked to write a piece for TheGenealogist on the actor Sir Ian McKellen to be live on their website before the Who Do You Think You Are? programme went out. 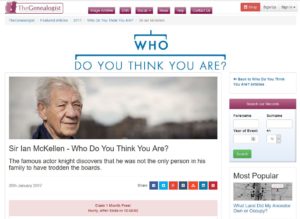 The very first thing I did was to see if I could find his birth in the General Register Office (GRO) birth records. To my frustration he was not there!

What did I do? I calmly considered what was the likelihood of him not being recorded, against there having been a mistake made in the records (I didn’t panic, or curse the online portal that I was using). I took a deep breath (point 2) and ran the same search at a second site to see if the record would be returned there. Unfortunately, there was no sign of him there either. It was time to take a step back (tip 3).

Often, when we can not find an ancestor, it can be for the reason that some sort off error has crept into the data; or the record was incorrectly written down at the time it was created. A little lateral thinking and Ian McKellen was eventually found to have been mistakenly recorded in the GRO Index for the April-June quarter of 1939 under the surname McKellar.

This neatly illustrates what can happen in the official birth, marriages and death records, as well as in other sources. The birth would have been reported to a local registrar shortly after Ian McKellen was born on the 25 May, 1939. Perhaps the writing was not clear at that stage? With census records, or baptisms, we have to also consider that the official, such as a census enumerator or the vicar in the church, misheard the name.

Even if the surname had been given correctly to the local registrar and faithfully noted in their records, they would have copied their information and sent it on to the GRO – did they make a mistake at that stage? Or was it when the GRO collated it into the index that most of us will use to order a certificate from?

Another stage that mistakes can happen, although not in this particular case, is when these indexes go online. The website will have created a transcription of the data in order that their search engine can find the entries when we type a name into their search box.

This week I came across an example of a transcription error, one that can be easily forgiven when I opened up the image of the census to see a florid capital J that looked exactly like an S. I was searching for someone with the first and middle names of Frederick and John. For some reason, however, they had been enumerated by only their initials F.J. and then their surname. The top of the J had a short twist to the right and nothing to the left so making it look for all the world like an S.

My advice for family history researchers, who are having difficulty finding their ancestors in the records, is to stop; breathe; and think. Consider the possibility that your ancestor really is there in the records, just not quite correctly recorded as you, or probably they, would have liked.

Compensated affiliate links have been used on this page