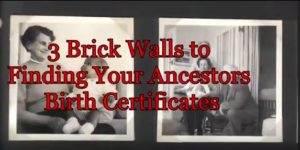 In my recent video for my YouTube Channel I looked at three brick walls a researcher may have finding their ancestors birth certificates in England and Wales.

Mistake number one that people make is to believe that their ancestor would have been registered with the name that they went by for the rest of their life; but this is not always the case.

What if, in between registration and baptism, the parents decided to change the name of the child? It would have been possible, under the law, for them to amend the birth registry by going back to their local registrar to give them the new name – but very few of our ancestors would have actually bothered.

Another thing to look out for is that some people prefer to be known, when they have grow up, by their middle names. Now I know of a family where the father, the mother and all the children all go by their middle names making them impossible to find in the official documentation of census and poll books.

Here is another scenario: let’s say there are two brothers who have two sons roughly about the same time and they both decide to call their sons John, in memory of their grandfather John Snr. Well the two cousins, as they grow up, may want to adopt different names in order to differentiate themselves from their cousin.

Mistake number two I like to call ‘Surnames Surprise’.

Where parents are not married then in most cases the birth is recorded under the mother’s surname and usually that’s going to be her maiden name. But consider a case where she is a widow and so her legal surname is that of another man; so that the child will have been registered with that surname because its mother still has that name!

A slight variation to this is where somebody takes their stepfathers name. Maybe you found them in the censuses using the stepfathers name and because when you come to look for the registration you’ll find them registered under the name of their father, who perhaps has now passed away.

The third mistake that people make I will call ‘Who’s the father?’

So what if your ancestor never knew their father and then, when they come to their wedding day, what is the name that they are they going to enter (or give to the vicar or the registrar to enter) in the marriage registry? If they don’t know what their father was called then they may well make it up.

Also people can make their fathers names up and their occupations to make themselves more important. I had a case researching a client’s family where we found a soldier marrying in a garrison town. He gave his father as being Colonel Hamish Brown. It turned out, through my research, that his father was actually Reg Brown, a policeman.

So if you’d like to find out more about how to tease out your elusive English or Welsh ancestors then go to
www.FamilyHistoryResearcher.com