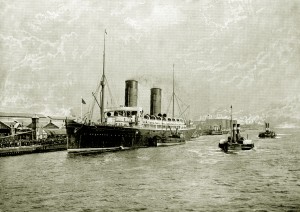 RMS Campania, one of the ships included in the passenger lists.

This is an interesting press release from TheGenealogist

TheGenealogist has just released five million Emigration BT27 records as part of their growing immigration and emigration record set. Uniquely TheGenealogist allows you to track transmigration of people across countries routing through British ports on their way to America. TheGenealogist is the only website with the facility to discover families travelling together on the same voyage using our SmartSearch technology.

The new records contain the historical records of passengers who departed by sea from Britain in the years between 1896 and 1909. These new records significantly boosts the already strong Immigration, Emigration, Naturalisation and passenger list resources on TheGenealogist.

TheGenealogist has further revealed that these records will be shortly followed by the release of many more unique migration records.

The searchable records released today will allow researchers to

This release adds to TheGenealogist’s Immigration and Emigration records that already include the useful Naturalisation and Denization records.

Those with ancestors who travelled out of Britain will welcome this fascinating new release from TheGenealogist that reveal the details of the coming and going of passengers and is a precursor of a set of unique records joining the collection shortly.

Within the passenger lists, on TheGenealogist, we can find the passage of the Dunottar Castle from Southampton to Cape Town in South Africa on the 14th October 1899. One of the passengers was the young Winston Churchill who, at that time, was a member of the Press and was going out to report on the start of the Second Boer War.

Two days before his ship’s departure the war had broken out between Britain and the Boer Republic. At the news of this conflict Mr Churchill had obtained a commission to act as a war correspondent for The Morning Post newspaper. In return he was to be paid £250 a month for his services.

After spending a number of weeks in the Colony he managed to get himself onto an armoured train, loaded with British soldiers, performing a reconnoitre between Frere and Chieveley in the British Natal Colony during November 1899. A Boer commando force, however, had placed a big boulder on the track and the train crashed into it. The Boers, having succeeded in stopping the train, then opened up with their field guns and rifle fire from a vantage position.

After a fight a number of the British were taken prisoner, but the locomotive, decoupled from the carriages and ladened with men, managed to escape. Churchill, unfortunately for him, was not one of those on-board the loco. Without his sidearm, which he had left on the train, he had no option but to surrender to the Boers. Churchill was then imprisoned in a POW camp in Pretoria. After being held captive for about four weeks Churchill escaped on the evening of 12th December 1899. He did this by vaulting over the wall to the neighbouring property and taking flight. 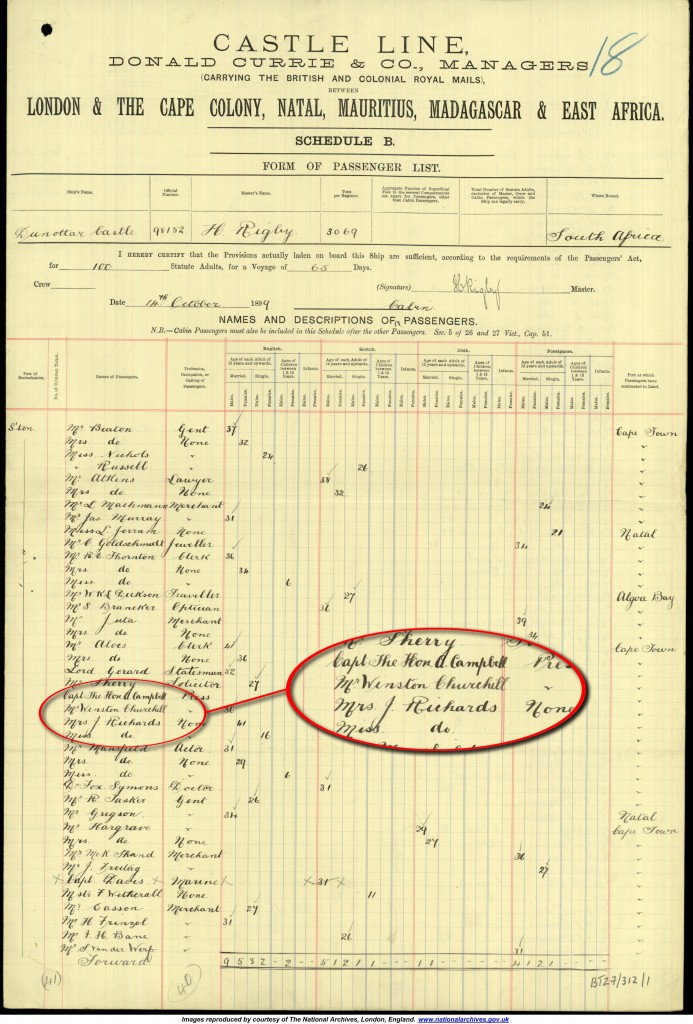 If we look at Churchill’s travelling companions on the ship out to Cape Town, scheduled to take 65 days, we can see that he was sailing with a mixture of merchants, a jeweller, an actor, a Peer of the Realm (Lord Gerard), an optician and a couple of lawyers. The Hon A. Campbell was also listed, he was another member of the press corps who had made it on to that particular Castle Line sailing to the war zone with Churchill.

I like the unique search facilities for these records which makes this release fascinating.

Take a look at TheGenealogist now.