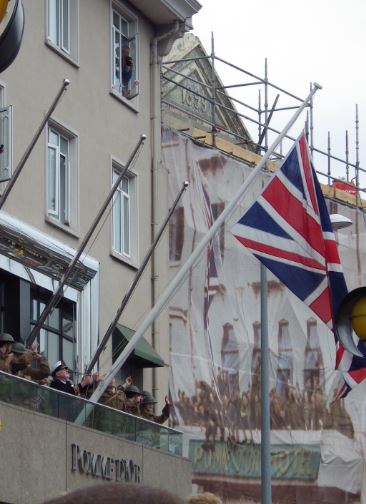 Its May the 9th and here in the Channel Island of Jersey it is the 70th anniversary of the Liberation of this island from the Nazi occupation.

As a child, in 1960s Jersey, I grew up understanding the importance of the day to many of the people around me who had lived through the German Occupation.

As I have grown older, so many of these people have sadly passed away. I felt, this morning, that it was important for me to go to what is now named Liberation Square, but was then known simply as the Weighbridge and to stand witness for all those that I have known who lived through the five years under the swastika.

At the re-enactment of the first raising of the British flag on the Pomme d’Or hotel, I found the commemoration very moving especially as covering the scaffolding on the next door building site is a blown up image of the actual raising of the Union Flag on the hotel that had served as German Naval Headquarters. 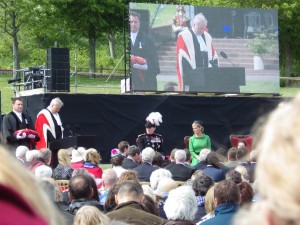 This afternoon has seen a visit from H.R.H The Countess of Wessex and a sitting of the States of Jersey (the legislature for the Bailiwick) in her presence. It was held in the open air in People’s Park the setting for the first anniversary of the Liberation. But the most moving part was a bit of theatre where some of the island’s youth told the story of the occupation, relating stories about real people who lived through this era.

It is this social history that is so important to family history and so it is appropriate that I conclude this weeks post by mentioning  the unique pictorial records of over 30,000 people who lived in the island during the war.

Family history researchers searching for family who lived in Jersey during the WW2 German occupation can now download their registration card, which includes a photograph of their ancestor, in this fantastic recently made available online resource from Jersey Heritage. 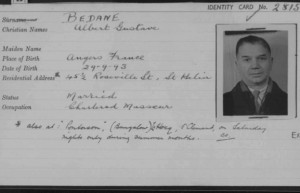 The collection, which has been recognised by UNESCO for its importance and has now been digitised and added to the Jersey Heritage website by Jersey Archive, gives access to 90,000 images that can be searched for free at the link below:

It is free to search, although there is a fee of £5 to download a card. Researchers with Jersey family may wish to take out an annual subscription for £30 to make the most of other resources, including thousands of historic photographs, many with named individuals.