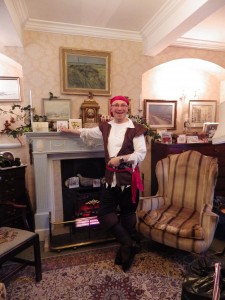 I’ve been off line for some days now as the family home, that I was visiting for Christmas, has been suffering from a basic lack of broadband. BT were persuaded to check the line, but the signal remained elusive to all my devices until now. This, I hope, explains my lack of posts on the blog and on Facebook for more than a week.

Fancy that, days without any proper connection to the outside (virtual) world with only the snatched five minutes here and there, when out at a public hotspot. How did we all survive prior to the web connected world we are so wedded to today?

So what did we all do, over the festive period, without being able to check the web, read emails or post on Facebook?

Our extended family reverted to a more traditional Christmas of socialising with each other, eating food around a huge dining table and playing games. One day we all donned costumes, on a Gilbert & Sullivan theme and so I am happy to reveal my true self on this page as Nick the Pirate from Penzance! This was a planned competition that forced everyone to join in an make a spectacle of ourselves –  the reward being a Christmas cocktail brought back from the Merchant Navy in the Second World War by my dad and now a tradition in the Thorne family. It seems that if the troop carrier ship, on which he served, was at sea for Christmas then the Shaw Savill Line provided the officers with a bottle of Gin, a bottle of Martini Rosso and a bottle of Martini Bianco. What did they do? They mixed them together of course!

We had quite a few tipsy Pirates in our house that day, with one Lord High Admiral trying to keep order. 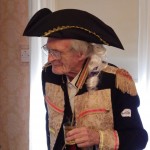 Many people that I speak to seem to relish the prospect of finding a felon, such as a pirate in their family tree. Much as I have tried to root one out in my tree and despite that many of my ancestors were from the West Country and sailed the seas as mariners, I have yet to find one.

I have found mariners in the Shipping Crew Lists, such as that available from TheGenealogist, but no Pirates. I’ll keep looking as revisiting brick walls several times often results in a break through.