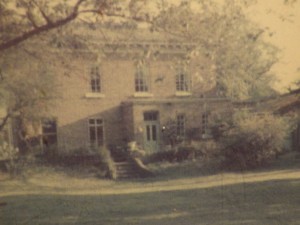 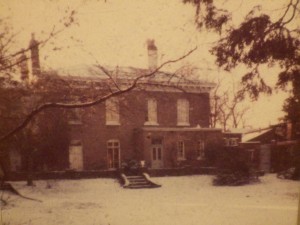 I was looking back at some old photographs from the 1970s this weekend.

They are quite faded colour pictures taken on a Kodak Instamatic camera from the time and I was about 18 and starting my first job as a reservations clerk for a tour operator in Birmingham.

This was the house in which I lived. You can’t see my room in either of the photos from the back garden, neither in the summer snap, nor winter one.

The reason was that my room was right up in the attic and had a skylight that was up high and was somewhere near the chimney on the right. If I got up on a chair I could see a flat piece of roof and if I clambered out of the window I could then see distant high rise flats through Edgbaston’s leafy canopy.

This journey into my past made me stop and think about the house and its history.

Thinking about it now, my room must have been intended for a servant to sleep in, and so it had me wondering if I could find, in the census collection, the names of those who had once occupied this house.

One of the great tools that subscribers to TheGenealogist get is the ability to use their address search on any of the census from 1841 through to 1911. There is also the ability to search for a family in the census, which I have found really useful in the past. This is in addition, of course, to the normal name search of the census that you are probably use to using.

So in this case I made a search of “Carpenter Road in Edgbaston” and soon discovered that it had once been known as Carpenters Lane. I easily located the house and discovered that it was owned in 1841 by a 35 year old Merchant called William Bolton, his 25 year old wife and 6 children and looking after them were three servants, one of which must have occupied what was destined to become my room!

Moving forward through the years I discovered that by 1861 it was occupied by a different family, the head of which was a Solicitor and he managed with just two servants.

As the decennial census came and went the occupiers and their servants changed until in 1891 a 52 year old man with the same Christian name and surname of William Bolton is recorded as the head! Looking back to the 1841 census there is no 2 year old son recorded to the first William Bolton. Is this just a coincidence, or is it a member of the family taking back a house that has been leased out for many years? Perhaps I may look into this one day.

Without knowing about the facility at TheGenealogist to do an address search of the census data I would never have uncovered this intriguing fact.

By the way, all the servants that may have occupied my room were females. I do wonder if any had managed to climb out of the skylight, to stand on that narrow piece of flat roof next to the chimney, as I had? With their long skirts I think not!

TheGenalogist has some easy to use search tools and thousands of records to help the family historian find their ancestors. Click on the image below and get started!