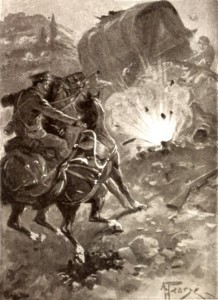 I’ve heard from the team at TheGenealogist about their new medal release that gives full details of heroic soldiers and their deeds in the First World War and The Second Boer War to aid you in your search for more information on your ancestor’s war exploits.

Analysis of these newly released Distinguished Conduct Medal records uncovers stories of heroism and exceptional bravery from ordinary soldiers. The medal was instituted in 1854, but the desperate fighting and struggle of the First World War saw the medal awarded to a larger amount of soldiers for the first time.

TheGenealogist.co.uk has released complete new records of Non Commissioned Officer’s and Other Ranks who were awarded the Distinguished Conduct Medal in The First World War and The Second Boer War.

Uniquely these new records show full details of the Recipients Medal Card combined with a link to The London Gazette which in numerous cases contains full details of the heroic deed that won them the medal. The Gazette is the one of the official journals of the British Government and can be classed as one of the oldest surviving English newspapers.

The records contain full details of the soldier awarded the medal –their name, rank, regiment, date of medal citation and details of their heroism in battle, all easily found using ‘SmartSearch’ on TheGenealogist.
Men from all walks of life found the strength and resilience to summon up acts of courage to go above and beyond the call of duty.

The first Battle of Ypres reached a crisis point for the British at the end of October 1914. The 1st Division were being driven back and the 1st Coldstream Guards had been wiped out in the fighting. At a critical moment, Sergeant J. Kirkcaldy of the 26th (Heavy) Battery, Royal Garrison Artillery (as seen in the illustration), brought up fresh horses under a terrific shellfire to replace those already killed. His gallant conduct saved a transport wagon. Details of his DCM Medal award can be found on TheGenealogist: 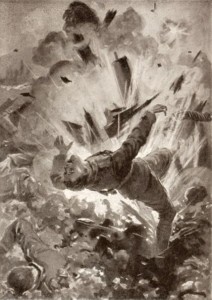 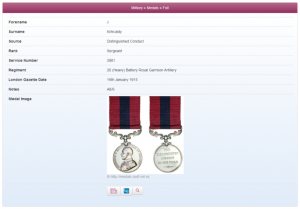 On October 20th 1914 at Chateau de Flandre, Sergeant Forwood of the 3rd East Kents (The Buffs) found himself in a desperate situation. Initially buried alive when a German shell hit his machine gun position killing or wounding his comrades, despite receiving numerous wounds himself, he managed to escape and report the situation to his headquarters to ensure their position was covered. His DCM award appeared in the London Gazette in early 1915 and an artist’s impression of the trauma he suffered is illustrated here.
His full details and link to the London Gazette are all found in the new DCM records on TheGenealogist.

Mark Bayley, Head of Online Content at TheGenealogist concludes: “We are continually making more historic military records available and our new DCM Collection with its link to the London Gazette brings all the information together for the family historian. Our collection of military records goes from strength to strength with more to come.”
To find out the extreme bravery of our soldiers and their courage in the line of duty see the dedicated page on TheGenealogist.co.uk/DCM. There you will find photographs, stories, statistics and a free search facility.