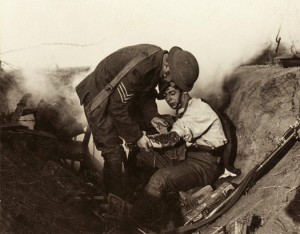 Following on from my blog post last Sunday, I have just heard from TheGenealogist to tell me about another set of First World War records.

Newly released for the first time are First World War Medal Records that crossed the great social class divide.
Over 117,000 ‘Military Medals’ were awarded in the First World War for ‘acts of gallantry and devotion to duty under fire’. These records are now available to view online complete with an image of the actual Medal Card and a link to the official government publication of the time. It’s a unique, comprehensive set of records available only on TheGenealogist.co.uk

The Military Medal was awarded to ‘Non Commissioned Officers and Ordinary Ranks’ and covers exceptional courage as a soldier in battle. It also was awarded for those that risked their lives trying to save others, often in extreme danger. The Medal Records on TheGenealogist show people from a wide range of backgrounds and social classes, including a number of young women from very privileged families who chose to drive ambulances and rescue the wounded in the mud of battle.

The role of ‘stretcher bearer’ was one of the most dangerous jobs of the time and surprisingly, the records show many women bridged social constraints of the time to risk life and limb to help rescue and bring in soldiers wounded in battle.

Details now available on TheGenealogist range from the most highly decorated Military Medal recipient, stretcher bearer Private Ernest Corey of the 55th Australian Infantry, to Lady Dorothie May Evelyn Feilding-Moore, the daughter of the Earl of Denbigh (the first female recipient of the Medal), to Mairi Lambert Gooden-Chisholm who rescued a German pilot from no-man’s land. Both men and women, crossing the social divide and class customs of pre-1914 to demonstrate outstanding bravery.

The new Military Medal records provide:
Full details of the person winning the medal – their rank, regiment, date of medal citation and the details of their heroism in battle
Sophisticated search techniques to find the medal recipient with just one mouse click. A further addition to the comprehensive medal and First World War records now available on TheGenealogist.co.uk

Mark Bayley, Head of Online Content comments: “With our military record releases in 2014, we are aiming to cover all aspects of The First World War. Every new record set unearths surprises and the Military Medal collection is no different as we discover the female front line heroes listed alongside those who fought to protect our freedom. These unique records consistently provide fascinating tales behind them.”

More details on the records of the First World War ‘Military Medals’ can be found at www.TheGenealogist.co.uk/military-medal