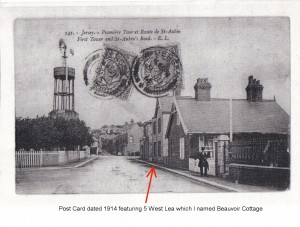 I’ve been looking at my house history this week and in particular the people who lived in what has become my home, way back in 1901 and 1911.

To do this I went to TheGenealogist.co.uk and selected that I was looking for an address and then the 1901 census and the palace, in my case Channel Islands as I live on the outskirts of St Helier, Jersey in an area called First Tower.

From my own research I know that the house was only built around 1900 and was near to what use to be a railway station. The railways are long gone from Jersey but around the turn of that century the Jersey Railway ran along the seafront from St Helier to St Aubin.

So it was no surprise to find that the occupants of my house worked for the railways.

In 1911 the head of the household was a 29 year old Ship’s Cook working for the Marine Department of the Railway Company and was born in Portsmouth. His wife was a  24 year old Jersey girl and they had a one year old son. The head’s brother, a single man from Portsmouth, lived with them and worked in a wine and spirit works. To complete the household they also had a boarder as well. Five persons crammed into this small seaside cottage must have been difficult for privacy.

The boarder was another railway worker, a Loco Engineer Foreman from Durham. He was slightly older than the others at 34 and was married, but no sign of his wife in this property. Perhaps he was working away from home to earn a crust?

One of their near neighbours was a Railway Clerk thus indicating to me how the railway was an important employer at this time.

If I look at the 1901 census my house is not yet inhabited, but the neighbours include a Telephone Company worker and a manager of some sort; but no railway workers!

Having found this interesting I may now go and look at some of the other places I have lived in England and Jersey.

Have you looked into your own house history? Why not take a look at what you can find on TheGenealogist by clicking on the image below?

Disclosure: The links are compensated affiliate links that may result in me being rewarded by The Genealogist if you buy their subscription.