Last week I was writing about my findings from a search for one of my ancestors who married in South Devon in 1866. I had taken a look at the Church Register for The New Parish of Christ Church Plymouth and found my ancestor Samuel Stephens marrying Mary Ann Westlake on the 16th December.

What took my interest was that his father, Robert Stephens, was noted under Rank or Profession as being a Tide Waiter. He also lived in Plymouth being born in1805 and to his death. 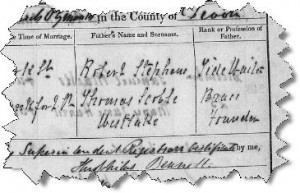 As many of us pursuing our family history have no doubt found, some of our ancestors had jobs that have disappeared or are now known by different names today.

I immediately wondered what type of occupation this Tide Waiter was, as previously I had seen him mentioned in the census as an “Extra Gent”.

What an ancestor’s occupation was can often give us a greater insight into their life. It is also a useful way of distinguishing between two people who happen to have the same name and between whom you are trying to work out which one belongs to your family tree and which one does not.

We can be interested in a forebearâ€™s occupation for the reason that it may have some relevance in determining a person’s social status, political affiliation, or migration pattern.

Skilled trades were often passed down from father to son and so having regard to an ancestor’s occupation may also be a useful tool in identifying a family relationship with others of the same name. Now Samuel and his father Robert did not seem to share a trade here, but it is important to remember that people could change their occupation over their life.

Names for old or unfamiliar local occupations have the potential to cause us to stumble if they are poorly legible in the record we are consulting. I can think of the example of the similarity between the words ostler (a keeper of horses) and a hostler (an innkeeper) that is easily confused.

If you are ever in this position then remember that you too can look for occupational data in several places. It may be found in the records of occupational licenses, tax assessments, the membership records of professional organisations to which our ancestors belonged, trade, city and town directories, census returns, and civil registration vital records.

There are a number of websites available that explain many of the obscure and archaic
trades, here are two that I have found:

So what was my Tide Waiter forebear? He was a Customs Officer who went aboard ships to search them for the revenue. This is made plain on the birth certificate for Samuel as his occupation is simply recorded as Customs Officer.

I found the scanned image of the marriage record in the Parish Records from Plymouth and West Devon at Find My Past.

Disclosure: The Link in the above box is a Compensated Affiliate link. If you click on the ad then I may be rewarded by Findmypast.co.uk should you sign up for any of their subscriptions.