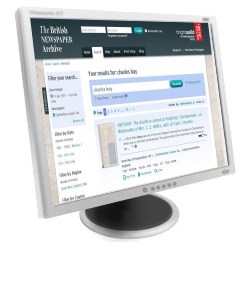 I’ve been browsing old newspapers online for ancestors this week with some success and some disappointments.

In previous posts, here, I have mentioned my luck in finding useful leads from articles written about the death of an ancestor of mine who, on sailing to Alderney from Weymouth aboard his yacht, went ashore for a social visit to the Garrison there, and fell to his death on the way back to the breakwater.

The British Newspaper Archive presented me with access to details from various newspapers reporting the “melancholy death” of my ancestor and revealed facts about his family that I was not previously aware of. For example, by the mentioning of his late father as being “of Hay, Merricks and Company” I was then able to find out something of the nature of that ancestor’s business in making gunpowder.

This week I was searching for a completely different line and regretfully I have had no luck with finding any newspaper articles related to this research. As the project, to add newspapers to the archive website, is ongoing I shall simply keep on returning and running the same search again and again. This is in the hope that new titles, that have been scanned in the intervening period, will become available with a relevant article to my research.

So, having not got a hit on the current project, I then started browsing for other ancestors, before leaving the site.

Members of my maternal line spent some of the 1850s in Cheltenham and would seem to have been comfortably well off. It was with some amusement, then, that I came across their names in the Cheltenham Looker-On featuring mainly in the Arrivals and Departures page.

I can not imagine that today the wealthy residents of Cheltenham, or any other town for that matter, would wish all and sundry to be made aware of when they were not in residence, or to where they have “removed” themselves to, but in those days it was socially acceptable.

The Looker-On mixed social news and literary contributions and was known for expressing Conservative opinions in its writings, though I am not sure that these were the views of my Cheltenham resident ancestors from other research I have done!

The British Newspaper Archive is a partner of the British Library and set up to digitise their collection of over 300 years of newspapers. Now accessible to the public, with market leading search functionality, it offers access to over 4 million pages of historical newspapers. A great source for hobby historians, students, reporters and editors – what will you discover?

Now you can also access pages from The British Newspaper Archives via their sister site findmypast.co.uk when you take out membership of Find My Past.

Disclosure: The Links in the above are Compensated Affiliate links. If you click on them then I may be rewarded by Findmypast.co.uk or The British Newspaper Archive.co.uk should you sign up for their subscriptions.