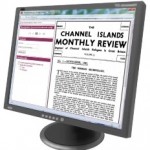 I’ve received an up date from TheGenealogist.co.uk to say that we can now search a newspaper containing Births Marriages and Deaths from the time of the Occupation of the Channel Islands on their site.

A selection of issues that cover the period 1941-1945 are available from the time when some evacuated from their homes to England. To keep in touch the refugees produced this journal.

The background is this. In 1940 German forces were threatening the Channel Isles as they advanced across France and the British government consulted the Islands representatives. It was decided then that the islands were not defensible and so they would be demilitarised. A massive evacuation was carried out during late June 1940 and those residents of the islands that wanted to leave, boarded a flotilla of ships to the UK where they settled.

It is a matter of history that the Channel Isles were the only part of the British Isles to be occupied during WWII and by the 1st of July 1940 they had surrendered to the German Army.

During the war ex residents kept in touch with ‘The Channel Isles Monthly Review’. These journals listed Births, Marriages and Deaths plus allowed islanders to keep in contact with friends and family. TheGenealogist has now included pdfs that can be searched in their newspaper section of the site and they promise that it will grow as new issues become available.

Just read the following excerpt for a flavour:

Nov 1941 issue “A young Jerseyman has escaped from Jersey. Three days and three nights in an eight foot boat without food.” This was his third attempt and he had previously spent four days on a rock that featured in Victor Hugo’s “Les Miserables” . This attempt he managed to evade two German E-boats that nearly swamped his boat.

Conditions in the island weren’t good as the Jerseyman reported:-
“The food supply is not the best. Fuel is short. Income tax is 4/6 in the pound to pay the expenses of the army of occupation.”
He also said to the Times that food is rationed and very scarce with Jersey butter, cream and other products exported much against the will of the population.

“There is a total absence of fats on the island so there are no cakes or pastry etc. The curfew is at 11pm”
People used the review to publish excerpts from letters about relatives on the islands and give news of family members.

The selection of issues covers 1941-1945 and are available to Diamond subscribers.

Take a look now and see this and other great data sets they have to offer at TheGenealogist.co.uk: