In the last posting about questions with my ancestor’s wedding certificate I discovered that the parish was not written on the document as I had expected it to be. Instead of St.Mary’s Portsea there was a series of pen strokes that seemed to begin with a P but could not be made out.

If you have read the comments, to that post, then you will see a suggestion from James Mac that it may have been a daughter church of St. Mary’s. He suggested I should try to tie down the incumbent, by using the resources of Crockford’s Clerical Directory. Well this is exactly what I did. In fact I used the 1865 edition that is available to search on Google Books for free.

From the copy of the certificate, that I had obtained from the General Register Office by post, I made out the name of the person marrying my 2x great-grandparents to be W H Rednap. I also noted that the marriage was by “Certificate”. 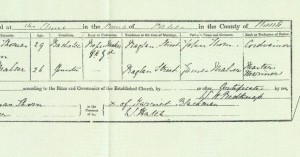 Now some folk have pointed out to me that “by certificate” usually means that the marriage was conducted by a Registrar. This is common in nonconformist church weddings and at registry offices. I turned to Mark Herber’s Ancestral Trails and found the line: “From 1837 marriages could also take place before civil registrars, or in chapels licensed under the Civil Registrations Acts. The law permitted the superintendent registrar to issue a certificate (similar to an Anglican licence) authorising marriages (without banns) in licensed places of worship”.

But even though the groom had been baptised in the Presbyterian church in Dartmouth, his wedding certificate indicates that it was carried out according to the Rites of the Established Church by one W H Redknap. Crockford’s confirms that William Henry Redknap was the Perpetual Curate of Milton, Portsea, in the diocese of Winchester from 1859, the year my ancestor’s married and formally the Curate of Portsea.

So then I looked into the history of Milton’s Church and found it was consecrated in 1841 and dedicated to St James, having been carved from the ancient parish of Portsea.

I do not know when in 1859 the Revd. Redknap took up his incumbency at nearby Milton, but my great-great-grandparents married in February 1859, in the early part of the year. So now I am leaning back towards the marriage having taken place in the main church of Portsea, by its curate before he moved to Milton. The Ancient Parish Church is St.Marys; but then this begs the question as to why it was “by certificate”?

I need now to consult the parish records of Portsea to lay this question to rest. Perhaps a trip to the Hampshire Archives is called for!

For more great tips to get your family tree back before 1837 in England & WalesÂ  buy my CD: 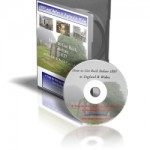