Sometimes genealogy can be very frustrating! You can use all the correct procedures to find your ancestors in the data bases and yet they still stubbornly remain hidden from you. A vital document has been destroyed or lost sometime long ago and this vital link in the chain is broken and you are left floundering around wondering where to turn next.

This weekend, 24th to 26th February, I had hoped to be able to visit the Who Do You Think You Are? Live show at Olympia and to report back to my readers on the latest in techniques for carrying forward our research, advice from some of the experts that I would have interviewed on video, new databases to search and news from the subscription sites. Regretfully I have been foiled by a bank of fog in the English Channel that has cancelled flights from my home in Jersey to London since Thursday!

A huge disappointment for me that my travel plans were scuppered, but this got me thinking about just how easy we modern travellers normally have it. So what if I have been hanging around for three fruitless days waiting for my half-an-hour flight to the capital, that never materialised? In the past our ancestors travel was often long, sometimes dangerous and undertaken with some trepidation. I am hugely impressed by some of my seafaring ancestors that braved storms, disease and long periods separated from home and family. What this does is bring into context the pitifully small inconvenience to me that I have lost the chance to do something that I had been so looking forward to. Yes I am fed up, but I believe that I am so lucky to be living today, with all the conveniences I have, even when sometimes they just don’t or can’t operate.

Having said that, however, this still doesn’t detract from the deep fascination that I have with my forebears and their past.

So what has been happening at the WDYTYA? LIVE show?

I noticed that Ancestry.co.uk has been streaming live from their theatre in the show this year. Unfortunately the download speed has given me some problems, so that I couldn’t watch the reports properly.

Findmypast.co.uk announced that we are now able to search 359,000 records of Merchant Navy Seamen for the period 1835-1857 on their site. These 19th century Merchant Navy records become available online for the first time with this brightsolid company’s work in association with The National Archives.

The background to the records is that from 1835, the central government started to monitor a potential reserve of sailors for the Royal Navy, which resulted in the creation of thousands of records that identify individual seamen. The information that these records hold about any of your potential ancestors will obviously vary. Normally, however, they include the name, age, place of birth, a physical description, the name of ship and dates of voyages that the mariner served on. This release adds to the 20th century Merchant Navy Seamen records, which were already published on findmypast.co.uk in September 2011. This means you can now search two centuries of records for your Merchant Navy Seamen ancestors, making it possible for you to trace their service over time. 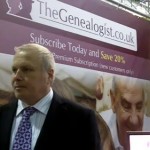 Nigel Bayley Managing Director of The Genealogist.co.uk talking to me at WDYTYA?LIVE last year.

TheGenealogist.co.uk have now released full transcripts for the final eight counties in the 1911 census.

The release of these counties brings the total number of records to over 36 million on their site and completes the 1911 census project. These census records, only available to Diamond subscribers, have been integrated into their existing search tools, so that you are now able to access the transcripts using their very useful House and Street search tool, their Keyword Master search and also their Family Forename search. This can help enormously to track down ancestors in this set.


Disclosure: The Links in the above are Compensated Affiliate links. If you click on them then I may be rewarded by Findmypast.co.uk or The Genealogist.co.uk should you sign up for their subscriptions.

2 Replies to “Genealogy can be frustrating.”