Something a little different today!

Here is a video that I put together on finding British Military ancestors: 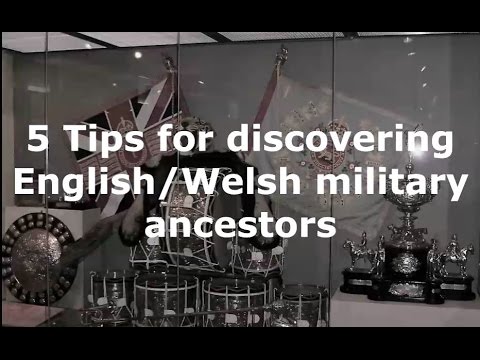 In this video we’re going to look at five tips for discovering your English or Welsh military ancestors. There are many military collections online and they range from such things as the early Muster lists for the Militia to medal collections from First World War and Second World War. Some Service Records and Prisoner of War  (POW) records etcetera.

The first record set that I’d like to draw your attention to is the First World War Casualty Lists. See them on Findmypast and also the fascinating resource that is the Casualty List records on TheGenelaogist.co.uk. In some cases they actually show you the printed page from the newspaper of the time that was informing the the poor people at home about what had happened to their service folk.

Second tip is to look out for war Diaries at the National Archives (TNA). Some of these are now appearing on the ancestry subscription site, but others you will need to go to the TNA for – or their website and pay to have a record copied and then sent to you.

Tip number three  – if you’re looking for your ancestors from the Second World War in the British Army the Royal Navy or the Royal Air Force then you need to visit the website page of veterans UK and there you can request a summary of service record from 1920 up to the present time. See: https://www.gov.uk/government/collections/requests-for-personal-data-and-service-records

Fourth tip: The National Archives holds service records prior to that date and following on from that the fourth tip is if you’re looking for an officer in the Royal Air Force and think of looking at the RAF confidential list in Air 10 series at the National Archives. From 1939 the Air Ministry realized that publishing the Regular Air Force lists with details of an officer’s postings provided useful intelligence for the enemy about new squadrons bases and aircraft so they split the list into two. One recorded the ranks and seniority of officers as it always had done and another one gave the details of the stations and this particular set of lists were called the RAF confidential list and were distributed on a strictly controlled basis so if you’ve already obtained your RAF ancestors service record then of course this will give you a list of stations or units using numbers and all initials which can then be used in conjunction with the Confidential list. Unfortunately these are not online so you’ll either need to pay a visit to the National Archives in Kew, Surrey or select the record and ask them for a quote to copy it and to send it to you.

To find out more about how to tease out your elusive English or Welsh ancestors go now to www.noseygenealogist.com/discover

discover thank you for watching