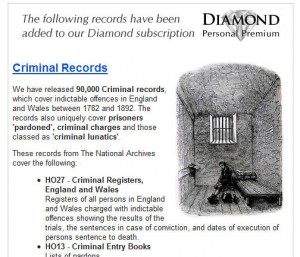 I see that TheGenealogist.co.uk has released a whole batch of records that are great for finding any ancestors of yours who may have fallen foul of the law!

Its a set of 90,000 Criminal records, which cover indictable offences in England and Wales between 1782 and 1892, that they have added to their websiteÂ  for Diamond members and these records also uniquely cover prisoners ‘pardoned’, criminal charges and those classed as ‘criminal lunatics’.

Coming fromÂ  The National Archives the records cover the following:

As TheGenealogist says in its newsletter this month, “the 1800s in England and Wales was a place where it was not difficult to get into trouble and end up facing a severe punishment, perhaps even the death penalty. These new records may help shed light on a family relative who broke the Law and paid the consequences.”

Some of us love to unearth the odd black-sheep in the family. So take a look here and join their Diamond level membership to take advantage of this data:

Disclosure: The links above are compensated affiliate links and may result in me being compensated by TheGenealogist.co.uk should you buy their products.