This Press Release has come from the team at TheGenealogist.

Like so many, I love maps so this is really exciting news! 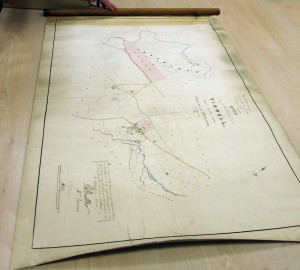 All aspects of society were captured by this survey

Get an idea of their working lives by the usage made of the plots by your forebears.

Fully linked tithe maps for Middlesex, Surrey, Buckinghamshire and Leicestershire with other counties to follow shortly

Geographically placing where your ancestors worked and lived

In partnership with TNA, TheGenealogist is making it possible to search over 11,000,000 records from across England and Wales and to view theses valuable original apportionment documents with linked maps on one website.

It’s always been a challenge to find where our ancestors lived, but now these records can help you explore the fields and houses in their home villages and towns. Never before have family historians been able search nationwide for these ancestral maps. We plan to have complete coverage in the next few months.

Tithe maps allow you to pinpoint your ancestors from our records. They show the boundaries of fields, woods, roads, rivers and the location and shape of buildings. The detail recorded within the maps and apportionment records will show you how much land they owned or occupied, where exactly in the parish it was, what the land was used for and how much tithe rent there was to pay.

The Tithe Commissioners maps are now housed in The National Archives (TNA). Due to their age and the materials used the original maps are often too fragile to handle. These were microfilmed in 1982 and some of the maps have deteriorated over the last 30 years. The first stage of the project is the release of these as online images. 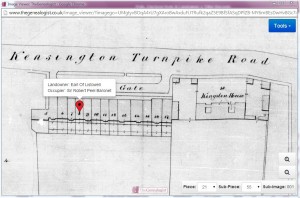 There are over 12,000 main maps plus thousands of update maps as the boundaries of fields changed over time.

The second stage will be the delicate conservation and digitisation of the original colour maps.

“Tithe records are a rich resource for family historians as they cover owners and occupiers of land from all strata of early Victorian society.

These maps can be three to four meters in length by several meters in width and have gone through a multiple levels of digitisation and processing so that the huge maps can load instantly, even on a mobile phone.This fantastic resource was created in the period from 1837 to the early 1850s as a result of one of the largest surveys into the usage, ownership and occupation of land in England and Wales since the Domesday book.”

Diamond subscribers to TheGenealogist are able to view apportionment records for all of England & Wales, with the accompanying maps now being live for Middlesex, Surrey, Buckinghamshire and Leicestershire. The maps for the rest of England and Wales will follow over the coming months.

See their page TheGenealogist.co.uk/Tithe to freely search the records and learn more about them.

NEWS from Who Do You Think You Are? Live

A great new resource has been launched by TheGenealogist at this year’s Who Do You Think You Are? Live show which I am really excited about. I’m talking about the Tithe records. Below is the information released by the team at TheGenealogist.

For the first time you will be able to search over 11,000,000 records and view the original documents online. The Tithe Records provide a unique view into our ancestral heritage by providing details of ownership and occupancy of land throughout England and Wales, revealing a wealth of information about people, places and landmarks in the Victorian era.

These pre-census records can allow you to further your research at the click of a button.

The Tithe Records are the perfect accompaniment to Census and BMD records and offer an extra piece in the genealogical jigsaw to give a valuable social and geographical insight into the lives of our Victorian ancestors.

The introduction of the Tithe Commutation Act of 1836 meant records were taken, as with the Domesday Book, of the land ownership and occupancy, land use and sizes, and the rents to be paid. This affected everyone – from aristocracy to peasantry, from politicians to labourers all levels of the social hierarchy found their way into the Tithe Records to give us a fascinating snapshot of a period in English history.

This first phase at launch will reveal all tenants and landowners across England and Wales from over 11,000 parishes. This will provide the opportunity to discover whether your ancestors were landowners and how their land was put to use, or if tenants or occupiers, which plots of land they were living or working on.

The second phase of the project will link images of microfilm maps with the plot references. Launch due Spring 2014.

The third phase will digitise the large original maps in colour for each county at high resolution to enhance this unique resource. Launch due 2015.

Mark Bayley, Head of Online Content at TheGenealogist concludes: ‘This has been an exciting, major project for us. The records touch upon the lives of every family so they really are a must have for every family historian!’

As you may know, if you have been following me for any length of time, that Devon is one of the areas of the U.K. that I research my ancestors in. Some of my Devonian forebears turned away from the established Church of England and became dissenters. There seems to be a rather limited number of nonconformist chapel burial records actually surviving within the county of Devon and so this can be a bit of a brick wall for us. Many family historians may well have found that in their own family trees, ancestors left the Church of England to practice their faith in other Christian churches.

By the law of the land, people of each and every denomination could be laid to rest inside their parish churchyard. Although this was the case, however, the relatives of people who were nonconformists were not allowed to have a Church of England burial service at the graveside. This would be fine if all the deceased’s family were no longer C of E, but I would guess it could be upsetting for family members who had not joined their relation in nonconformity and so would have wanted a service conducted by the local vicar!

I was intrigued to find out that people who held offices within the “establishment” were affected by another piece of legislation. I am talking here about Councillors as well as some other municipal officials. These worthy people were not allowed to put on their robes of office to attend the funeral of a non conformist councillor and this would have included the wearing of a mayoral chain etc. Should they rashly have broken this rule then they were liable to a fine of Â£100 and in addition they would likely end up being barred from civic office throughout the rest of their lives!

Many nonconformists, however, did not wish to be interred within land held by the Church of England. Quakers, most especially, established their own unique burial grounds. In these, the family historian will discover, plots defined by somewhat plain, uncomplicated stones that usually feature only the initials belonging to the departed.

A number of chapels established their own burial grounds, this included the Independents, Methodists as well as the Baptists. Furthermore, if you go researching your nonconformist ancestors in several country places in England, you will find that burial grounds were opened for all those involved with the various nonconformist denominations and would not specifically be confined to only one or other of the particular religious faith traditions. Around 1880 a welcome change, in the laws of England & Wales, granted the possibility for the family of a person, being laid to rest within a Church of England parish graveyard, to opt for a minister from their own religious beliefs to be able to preside over the burial service. This began the downfall in making use of separate nonconformist burial grounds as they were often less popular because of the fact that, in some cases, they were several miles from the particular village or district from where the deceased’s family resided. In 1853 and following on from the considerable overcrowding of church graveyards and burial grounds, due in some measure to the number of cholera fatalities and so forth, Parliament handed down a further law closing a large number of these areas to fresh internments. The result of the law saw many towns as well as bigger parishes setting up cemeteries, to look after the continued burial of the deceased.

To find earlier burial grounds nowadays isn’t always that simple a task. In an ideal world you would be able to find someone who possesses the required local knowledge of their location and is also willing to assist you in your research. I’ve had the happy experience of this while I was researching my family in Cheltenham, England. The local history society, as well as an amateur historian from one of the bigger churches, were luckily able to help lead me in the right direction to find my ancestor, for which I was very grateful. The basic scarcity of registers, nevertheless, will most likely make it tough if you want to research for names.

A further point, that you may need to take into consideration when researching your forebears, is that if the deceased was very poor and given a “paupers” grave, then the name of the unfortunate will not have been marked down in the burial records except for a numbered peg entered to locate the grave.

Lastly, I’d like to pass on this story that I have found reported in various places about a Church of England husband and a nonconformist wife wishing to be buried together. It is mentioned, for example, on the Bristol Times website thisisbristol.co.uk that in Arnos Vale Cemetery there is an elaborate monument raised for merchant Thomas Gadd Matthews (C of E) and his wife Mary (Congregationalist), which famously straddles both Anglican and nonconformist sections. The story seems to be that Matthews purchased a large grave plot strategically placed so that the two, while wishing to be true to their respective faiths, could be buried in a family plot that sits on the boundary line between the C of E and nonconformist parts of the cemetery. A rather lovely tale!