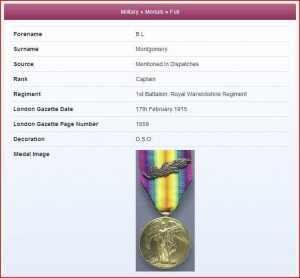 For the first time online, leading British genealogy research website TheGenealogist has released over 81,000 records of records of Mentioned in Despatches from the First World War, linked to citations from the London Gazette.

Find thousands of soldiers and army nurses who had come to the notice of superior officers for an act of gallantry, or meritorious action, in the face of the enemy in these records. The records created, when the recipient’s name appeared in an official report sent to the high command, can now be searched online only at TheGenealogist.

Some soldiers were mentioned in despatches (MiD), but do not receive a medal for their action, they are nevertheless listed in the records as they were entitled to receive a certificate and wear the Oak Leaf decoration on their dress uniform.

Only one such decoration is ever worn, even when a soldier is mentioned in despatches more than once, as was the case in the example of one Captain B.L. Montgomery.

Bernard Law Montgomery served in WWI in the Royal Warwickshire Regiment and was mentioned in despatches on several occasion so that we can find him no less than four times in the MiD records on TheGenealogist, the first of which is in 1915.

With one mouse click on the link to a transcript we can see the date the citation appeared in The London Gazette and note the date and page number for our research.

Another click of a link takes us straight to the website of the London Gazette so that we can then read the various pages that cover our soldier. By using the information from the transcript we can narrow our research right down to the correct page.

Following a third link on TheGenealogist results page gives us an image of the handwritten card record, showing even the military clerks corrections and crossing outs! 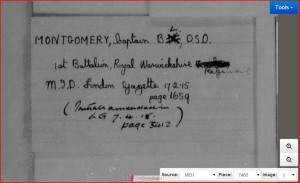 Awarded many medals in his time, including the DSO to which his oak leaf is pinned, this officer served between 1915 and 1918 ending the First World War as a Lieutenant Colonel. He was, as history tells us, to go on to become Field Marshall Montgomery and the 1st Viscount Montgomery of Alamein, one of this country’s important Second World War generals.

As a junior officer serving at Méteren near to the Border of France with Belgium he had been shot by a sniper through the right lung in October 1914. With the rich number of military records on TheGenealogist site we can also find him in the casualty lists. One click will then take us to an image of a page from the Times newspaper of October 20th 1914 in which he is listed.

Montgomery was hit once more through the knee and was awarded the DSO for his gallant leadership when he turned the enemy out of their trenches with the bayonet.

Once Captain Montgomery had recovered he went back to the Western Front in 1916 as a general staff officer, taking part in the Battle of Arras in spring 1917 and also the Battle of Passchendaele in the autumn of that year and ending his war as chief of staff of the 47th (2nd London) Division.

As the war wound on to its close, during Operation Overlord he was in charge of all Allied ground forces and on the 4th May 1945 he took the German surrender at Lüneburg Heath in north Germany. After the war was over Field Marshal Montgomery became Commander-in-Chief of the British Army of the Rhine and then Chief of the Imperial General Staff. From 1948 until 1951 he was chairman of the permanent defence organisation of the Western European Union and in 1951 deputy commander of the Supreme Headquarters of NATO.

Known for his lack of tact, he had upset the American generals Paton and Bradley during WWII and after the hostilities he criticised many of his war-time colleagues, including General Eisenhower who was by now the President of the United States. Monty was, it is safe to say, a complex but brave man who served in the British Army for 50 years. He died on 24 March 1976. 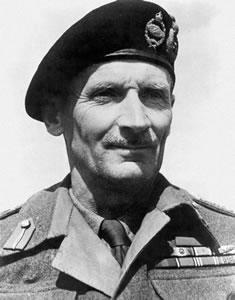 Mark Bayley, head of Content at TheGenealogist said “For those people searching for ancestors who had served in World War I, Mentioned in Despatches provide a unique addition to the already strong collection of military records that are offered at TheGenealogist”

Last week I wrote about how a family story had sent me off looking for my great-uncle Harold who served in the RAF during the Second World War and rising from Warrant Officer to Wing Commander in the Technical Branch.

One of my kind readers suggested a lead after they had done a Google search for H.P.Matthews that threw up a person of this name working for the Australian Department of Supply in a document referring to the Blue Streak Missile project. I had also come across something similar in Google Books and so was likewise wondering if there was a connection to Australia.

I set to work doing a trawl of Google search results and found a copy of an article in a 1959 copy of Flight Magazine with a picture of the Australian Government London Representative of the Department of Supply Mr H P Matthews.

Regretfully I came to the conclusion that it didn’t look to me to be the same man. You see I have a picture of my Great-Uncle in my baby photo album! He and my great-aunt Winnie came to visit me in the late 1950’s (I was born in the summer of 1958) and there is one of them with me as a baby.

A further search of Google books have thrown up some snippet views of books that have Wg. Cdr H P Matthews appointed as the managing director of Zwicky Ltd in 1958. This company was a filters, pumps, airport ground equipment, pressure control valves, and hydraulic equipment manufacturer of Slough and Harold Matthews was also the MD of SkyHi Ltd. a hydraulic jack manufacturers also of Slough and possibly related to the first company.

I did a search on the website www.forces-war-records.co.uk and here I could see that H.P.Matthews was awarded the MBE, OBE and BEM, 1939-1945 War Medal, 1939-1945 Star and was Mentioned in Despatches, but not a lot else.

I am still at the beginning of cracking this family story and it is a major regret that I didn’t know Uncle Harold better. It would seem he was some sort of an aviation engineer, but I still don’t know what he did in the war that got him such promotion and honours!

Disclosure: The above advert is a compensated affiliate link which may mean I get rewarded should you join their website.