Skip to content
This week on BBC television, here in Britain, there has been the first episode in a fascinating series following the history of the occupiers of one particular house in Liverpool.

A House Through Time is a 2018 four-part BBC documentary about the history of a house at 62 Falkner Street, Edge Hill, Liverpool, England, presented by David Olusoga

Using some of the tools that are familiar to family historians Olusoga is able to discover the story of the first three occupants of the house built on green fields in around 1840.

Watching him use some of my favourite resources – historic newspapers, street and trade directories from the time and the staple records of  the census collections – proved to be a case study in doing family history research. It was also good to see contributions from the TV genealogist Laura Berry, whom I once interviewed for my YouTube Channel and who, apart form working on Who Do You Think You Are? series, is also a house historian.

The characters that this episode uncovered were fascinating subjects. From the young customs clerk, living beyond his means with the help of a wealthy father, to the striving servant who managed to climb into middle-class and leave his wife a substantial sum on hisdeath. Perhaps the most interesting, however, was the Cotton Dealer whose life at the house gave way to a spell in debtors prison, before he then acquired a wife and two step-daughters – only to abandon them to the workhouse as he set forth for a new life in the United States.

This former occupier of the house, David Olusoga was able to deduce from the records, was an unsympathetic character. Having lived as a Cotton Dealer in Liverpool and making a living from cotton, picked by slaves, he then became a Coton Dealer again, in America, before joining as a mercenary fighting for the Union Army against the Confederates. Olusoga was seen to be very surprised by this turn of events as he had assumed that a cotton dealer would have had more sympathy with the Southern States and their ownership of slaves.

This TV series promises to be compulsive viewing and I am already looking forward to the next episode. I can’t wait to see how it will use more of the records, that we also work with when looking for our own family stories, to deduce the life tales of the next set of owners of the house in Liverpool.

The most recent episode is available for a short time to viewers in the U.K. here:

At the recent family history show, Who Do You Think You Are? Live, I was fortunate enough to be able to catch some of the presentation that Laura Berry gave. As a leading television genealogy researcher she had some great insights to give her audience from her experience with celebrity family trees and how you could use the techniques to find your own ancestors.

Later that day I caught up with Laura on the Discover Your Ancestors stand where she was signing her book:

The publication is aimed at family historians who are intrigued about their ancestor’s work life. It is often among the first details that we learn about an individual from the civil registration certificates and census records and from it we may make assumptions about a person’s social standing, community, financial situation and even their health.

What is the chapter on Profit & Loss about? In that chapter Laura casts her expert eye over collections of records that chart the peaks and troughs in an ancestor’s career whether they were tradespeople, craftsmen and women, in business, mariners, military or labourers.

Check out my video interview with Laura Berry: 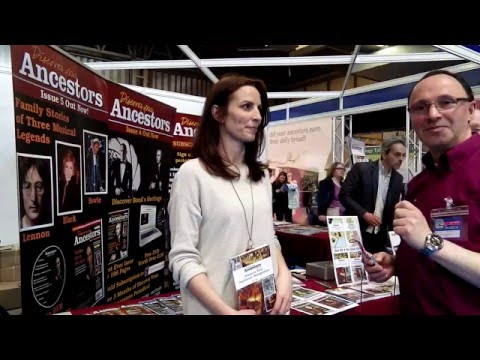