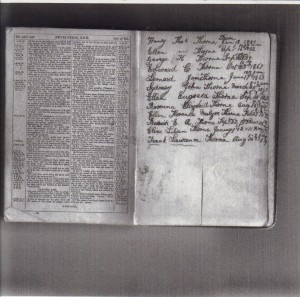 I wrote a Tip of the Week, about Ancestor Occupations and put it in my selection that I email out to my list if you are signed up. I decided to re-publish it as a blog post last week as: Take A Look At Your Ancestor’s Occupation. In its original email form it struck a chord with one of my readers, as she sent me some extra thoughts that I think deserve to be published here with her permission.

Another aspect of this topic to be aware of is that an ancestor may have actually held two occupations simultaneously and the census might report either one at random. For example, one line in my paternal tree in Pennsylvania (USA) had many generations with men who simultaneously were both farmers AND carpet/coverlet weavers, and well known known for both occupations during the same time span. Sometimes the census shows an individual as a farmer, sometimes as a weaver – yet I have confirmed that the individuals held both occupations concurrently for most of their adult lives. I also have a farmer/blacksmith, and several generations of farmer/pipe organ builders. Later generations worked as farmers and as local manufacturing employees, especially in years when crop yields would be under par. It would begin as a way to supplement income, then turn into a 50/50 arrangement. My maternal New England great grandmother was a teacher who also had her own dressmaking business at the same time.

When times are tough, in the past as well as today, it is not unusual for industrious individuals to hold down two jobs at once. Or in the case of some of my ancestors, one occupation that was “sensible” like farming and another that permitted some form of artistic expression (such as weaving, building beautiful church pipe organs by hand, and even creating practical and decorative goods as a blacksmith).

Again, thanks for the great article and tips.