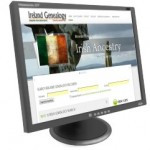 It’s a well known fact, in family tree research, that Irish family history is more difficult to do, than that of Ireland’s near neighbours, because of a lack of information and the deficiency of census records pre 1901. But this week I couldn’t help but notice several press releases about how three different websites were going to be able to ease that problem for family historians.

Back in March I spotted that Ancestry (www.ancestry.co.uk) had, for St Patrick’s day, updated its Irish Collection. This Ancestry said at the time was “the definitive online collection of 19th century historical Irish records.” It would, they said, make it easier for the nearly one in five Brits of Irish descent to explore their heritage.

In total, there are now more than 35 million historical Irish records on Ancestry.co.uk, including two million comprehensive new and upgraded records from the critical periods prior to and following the Irish Potato Famine (1845-1852), the single most significant event to drive 19th century global Irish Diaspora.

Next, I came across the news about a smaller enterprise called Ireland Genealogy (http://www.ireland-genealogy.com), this being a fascinating new web site for anyone doing Irish family tree investigation. It has its own database of Irish Pension Record applications, that enables you to lookup information extracted from the missing Irish Census and claims that this will help a researcher save both cash and time.

Their research workers have spent twenty years copying all these written pension applications (green coloured forms) and so giving us access to critical data from the 1841 and 1851 census records for all of Ireland. These pension public records are kept in the Public Records Office of Northern Ireland (in Belfast) and The National Archives, where they are available on microfilm, but this means that they could be quite tricky to understand as they are in no specific order. What is more, the records data held by P.R.O.N.I. are not indexed, adding to the difficulty of doing your research.

Ireland Genealogy claims that their database, of those pension applications, enables you to now look up this information with ease.

The third Press Release, that caught my eye, was from Brightsolid about the launch of their new website www.findmypast.ie on to the web. With online access, from the start, to over 4 million Irish records dating from 1400 to 1920s and the promise of over 50 million records to be available in the first year to eighteen months, this is a welcome addition to the findmypast family.

There are approximately 80 million people worldwide, who claim to have Irish ancestry, with just over half of this number (41 million) being Americans, the limited resources previously availble to them, to connect with their past, may at last be being redressed.

Findmypast.ie claims that they will carry “…the most comprehensive set of Irish records ever seen in one place, going back to 1400 right up until the 1920s, including the Landed Estates Court Records, the complete Griffith’s Valuation of Ireland and the Directories collection.” They will be offering high quality images of records on this site.

With the addition of these three resources, online, it would seem that Irish family research just got a bit easier.