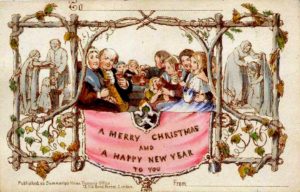 Its starting to feel a bit like Christmas, as I wrap the presents for some of my family today. Once I had finished doing this I thought that I’d better get in the festive mood on the blog as well and so I did a trawl of Wikipedia to find a picture of what is thought to be the first Christmas card produced.

The image above is of that very first in the line of seasonal greetings cards that we all now send. Commissioned by Sir Henry Cole, in 1843, he sold them for a shilling each. Sir Henry is best known as the man who had helped introduce the Uniform Penny Post, in 1840, to Britain and his Christmas card, illustrated by John Callcott Horsley, would have encouraged people to make use of the postal service.

The picture in the middle is meant to depict three generations of a family who are toasting the person to whom the card has been sent, while the other panels show scenes of charitable giving of food and clothing to the poor.

As it is the time of year to give gifts I decided that I should drop the price of my best selling English/Welsh family history course – at least from now until New Year’s day – as my Christmas present to you. 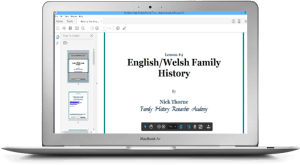 If  you are struggling to find your English or Welsh ancestors and break down your brick walls, then you would do well to take a look. With this course you will quickly learn where to research on and offline, what resources to use and gain some useful tips and techniques.

To read more click one of the links here and make a seasonal saving:

and a Happy New Year