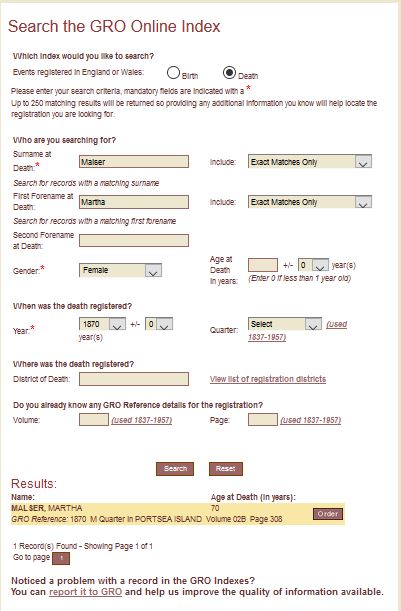 The General Register Office for England and Wales (GRO) has revamped part of its online certificate ordering services.

The government department responsible for providing copies of birth, marriages and death certificates has released two searchable indexes via its website, but only for those births and deaths registered in the years 1837-1915 and 1837-1957 respectively.

We have all been accustomed to using the GRO indexes via third party websites such as FreeBMD, Ancestry, Findmypast and TheGenealogist, noting down the volume and page number of our ancestors’ entries before paying a visit to the GRO website to order hard copies of the certificates by post. But now, the new GRO indexes will allow family history researchers to click through from their findings on its site and buy the copy certificates all from the same website. You will still need to use the third party sites for marriages and for more recent dates, however.

As an added bonus, the GRO birth index also gives us the mothers’ maiden names for the full range of entries. Up to now using the online indexes at the other sites has meant that it is only possible for family history researchers to view these details for births registered from July 1911 onwards. This extra resource could be very useful to those who want to identify children who had died in between the census years, and for whom no other documentary evidence can be found.

Secondly, the new GRO death index on their site will allow a user to search for a likely ancestor by entering the age at death from the beginning of their records in 1837.

This new GRO indexes have been launched online following several weeks of beta testing with members of the genealogy community.

The news first came to my attention in the newsletter sent out by Peter Calver, founder of the popular website LostCousins, who has been one of those involved in several weeks of beta testing with others and in his latest email newsletter, Mr Calver has revealed that the GRO is planning another twist to the service by trialling the option to have digital copies of certificates available for the first time in the form of uncertified PDF versions of birth certificates for the years 1837-1934 and death certificates from 1837-1957.

The cost will be £6 each, saving money and the wait for the postal delivery (a paper certificate costs £9.25). But the bad news is that the trial starting on the 9th of November and will last for three weeks, or until 45,000 PDFs have been purchased.

So will you be heading over to the GRO website on Wednesday?

As I mentioned last time, there are occasions where you find something in the BMD indexes and you canâ€™t get to Royal Square in time to see the certificates. But there are two sets of data in the Archive that can help you to nail dates of marriages and deaths down.

To access the draft registers, you need to use the Reference search facility on the OPAC. The collection reference you need is D/E: this will get you to the top of the collection. Reference D/E/B covers the third copy, and you will find that itâ€™s divided into individual collections from specific Church of England churches and general collections of nonconformist and civil marriages from 7 parishes. Itâ€™s not quite a complete set, but the vast majority of material is there and you will find that most of the time there is at least some degree of correlation between the indexes and the draft registers.

As far as recording deaths goes, the simple answer is that there will almost always be a burial shortly afterwards. There are two ways that you can attack this problem: one is to look at the records kept by the cemeteries, and the other is to check the funeral directors. Cemetery records exist for two of St Helierâ€™s major burial grounds â€“ Almorah and Mont Ã  lâ€™AbbÃ© â€“ between about 1860 and 1950, and there are also records for some of the other burial grounds around the island including MacpÃ©la, the non-conformist cemetery at Sion Village. These are all in folders in the reading room. One cautionary word: women are indexed by their maiden name only (although the married name is given).

The Archive also received a major deposit from a local funeral director the other year, containing records of seven of their predecessor companies, some of which go back to about 1820. Again, youâ€™ll need to use the OPACâ€™s Reference Search, and this time the collection reference is L/A/41. Be aware that for any given period you may have to look at two or three different companiesâ€™ books â€“ but feel free to enlist the help of the volunteer from the Channel Islands Family History Society if you need advice. These records are fascinating, because they will tell you not only who was buried when, but how â€“ the relative spends on funerals vary from parsimonious to lavish â€“ and also who paid for it.

Death is one of the great certainties in life: taxation is the other, and weâ€™ll take a look at that next time. Until then – Ã€ bÃ©tÃ´t!