I was passing by a village war memorial this week, still resplendent with its poppy wreaths from theÂ  remembrance day service. I took to wondering about who these named individuals, carved in stone, were and what their lives had been before they went off to fight and die for their country.

So it is sort of apt that I just got this in from TheGenealogist. It deals with the National Union of Teacher’ War Records, giving some insight into one set of professionals who answered the call to go to war.

The Diamond subscription on TheGenealogist now has over 18,000 new records to access from the â€˜National Union of Teachersâ€™ War Records from 1914 to 1919. These records include a list of teachers who joined the forces, those who received honours, and also those who were sadly killed, plus other information relating to the National Union of Teachers during the war. 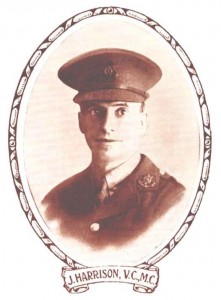 Covering all N.U.T. members who served in the war and also discussing issues of the time, such as pensions, salary levels of teachers who joined the army and fund raising for relief in Europe.

The records are a comprehensive list of members of the National Union of Teachers who served in the Great War. The teaching profession and its members responded to the great nationwide pressure to â€˜do their bitâ€™, with most male teachers of service age answering the call to arms.

The â€˜National Union of Teachersâ€™ had a number of courageous medal recipients amongst its members. Listed here is 2nd Lieutenant Jack Harrison of the East Yorkshire Regiment. He was killed in May 1917 in Oppy Wood, France aged 27. After having earlier won the Military Cross for bravery, he was posthumously awarded a Victoria Cross for single-handedly attacking a German machine gun post to protect his platoon. His body was never found.

He taught at Lime Street Council School in Hull and also played rugby league for Hull FC as a prolific try scorer. He is listed among the â€˜Gallant War Deadâ€™ in the records along with the name of his school.

The records provide an interesting insight into how a specific profession and its union coped with the events of The Great War. Taken from the National Union of Teachers War Records 1914 to 1919 publication, the records can be found in the War Service Lists in the Military Records section on TheGenealogist.

Mark Bayley, Head of Online Content at TheGenealogist comments: â€œThe war affected so many lives, but it can often be hard to trace records for those who survived. This is why TheGenealogist is committed to providing more unique records of those who survived, whether they are casualty lists, prisoners of war, or in this case full service lists for specific professions. We are aiming to continually add more of these specialist records to provide family historians with more unique data at their fingertips.â€

Take a look at TheGenealogist.co.uk to search these records.