Hope you are all having a great holiday season and if you celebrate Christmas, like I do, then I hope you have had a very peaceful and happy Christmas.

I am just back to where I can get online after a visit to North Wales. My journey was exciting, to say the least, with elderly parents and a dog on board and just getting out of the storm zone through flooding roads, torrential rain and low viability that made the deep standing water puddles impossible to see until the car was ploughing right up to its sills through them!

While I have been away I see that TheGenealogist has made a couple of important announcements and so I copy below the email that has been stuck in my inbox for days! It is exciting to see that the Tithe maps are now complete for England and Wales and I look forward to New Year’s day and the release of the first batch of Norfolk Record Office records.

We have been working extremely hard to bring you two significant releases for the Christmas period, the first is now live and the second will be released on New Year’s Day.

Firstly, we have announced the completion of our Tithe maps for England and Wales. That includes all 55 counties linked to the 14 Million searchable tithe schedules, to make it easy to see what plots of land your ancestors owned or occupied. You can read more about the release here.

Secondly, on New Year’s Day we’ll be releasing the first batch of records from our project in partnership with Norfolk Record Office, containing over 3.6 million individuals and fully linked to the original images of the registers.

These records will be available to all Diamond users.

As the Christmas mayhem is in full pelt all around me I have taken to finding a quite moment with a book. Currently I am thoroughly enjoying a Genealogical Mystery novella called The Orange Lilies.

Written by Nathan Dylan Goodwin this is a novella that follows on from book two in the Lost Ancestor series where forensic genealogist, Morton Farrier, delves into other people’s family history. In this entertaining read we find him putting his professional skills to use to find out about his own complicated family having discovered his biological mother was someone that he had always known.

What I liked about reading the book at this time of year was the flipping back and forth between a present day Cornish Christmas, spent with family in a cosy cottage, and the very different Christmas of his great-grandfather in World War I on the front.

The author weaves a fascinating tale and the twists and turns had me turning the pages to find out what happened next.

I heartily recommend this book! Buy it now in paperback or Kindle ebook from Amazon by clicking the link or image below. 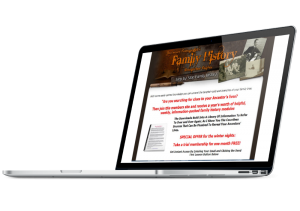 I’ve been asked if I can do a gift subscription to my popular Family History Researcher Academy:

The course delivers weekly tutorials on the records, resources and techniques that will help those of us with ancestors from England and Wales to find them where we might not have thought of looking. By discovering the many record collections that exist and tips on how to use them, we are better armed to find elusive ancestors who may be hiding in plain sight.

See what others have said about the course… 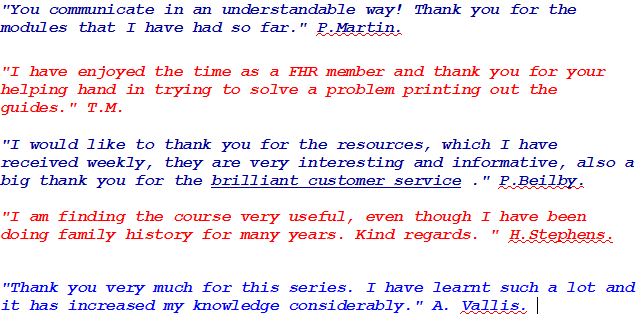 Give a Gift! Once you have paid simply make sure you enter the name and email of the person to whom we should send the lessons.
To buy the full 12 month English/Welsh Family History Course for reduced price of $94 (US Dollars) please use this PayPal button.

To buy the full 12 month English/Welsh Family History Course for reduced price of £70 (GB Pounds) please use this PayPal button.

Or buy a subscription in GBP, paying in monthly instalments, by going to this page: TRIAL OFFER to pay monthly! 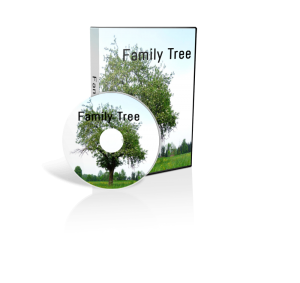 Oh dear me! Another major genealogy company upsets its customers this week!

This time it is Ancestry’s Kendall Hulet, Senior Vice President of Product Management at the corporation who posted an article to the Ancestry Blog on the 8th December 2015 stating,

“We’ve made the tough decision to stop selling Family Tree Maker as of December 31, 2015.”

I counted 8,212 comments as of Sunday morning, when I last looked, and they are mostly an avalanche of disappointment and anger.
How is it in these days that big business make decisions that are not customer led?

What this has done, however, is create a superb opportunity for the makers and vendors of similar family tree software to encourage dissatisfied Family Tree Maker customers to look at changing to one of their alternatives.
In the British Isles I got a timely Christmas greetings email in my inbox this week from my friends over at S&N Genealogy Supplies in Wiltshire.

With the news that Family Tree Maker is being discontinued, many users are looking for an alternative software package. We understand that changing programs can be a daunting task, so we’ve selected our most popular software packages for you to consider.

Please remember that we are happy to offer advice on any of our products to make sure you get the one that suits your needs.

This genealogy retailer has many other products on offer at its website (www.genealogysupplies.com) as well as advanced notice of a new piece of software called TreeView that is scheduled for launch in January and comes with a package of extras.

Published in the UK for the UK market, this comprehensive program suits beginners and experienced genealogists alike. Create professional trees and printouts with its advanced reporting capabilities. With the TreeView mobile and tablet app, you can sync across multiple devices to enable you to keep your tree up-to-date whenever and wherever you are. 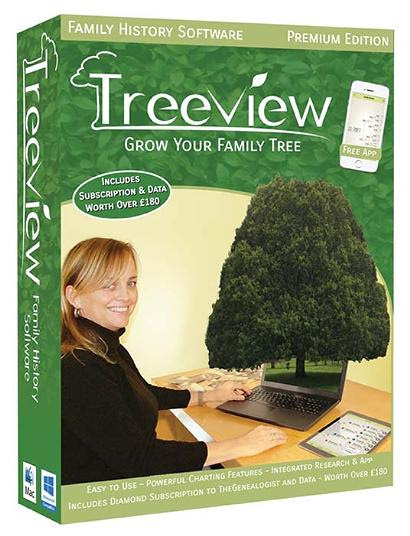 Includes a 4-Month Diamond subscription to TheGenealogist and Data worth over £180! 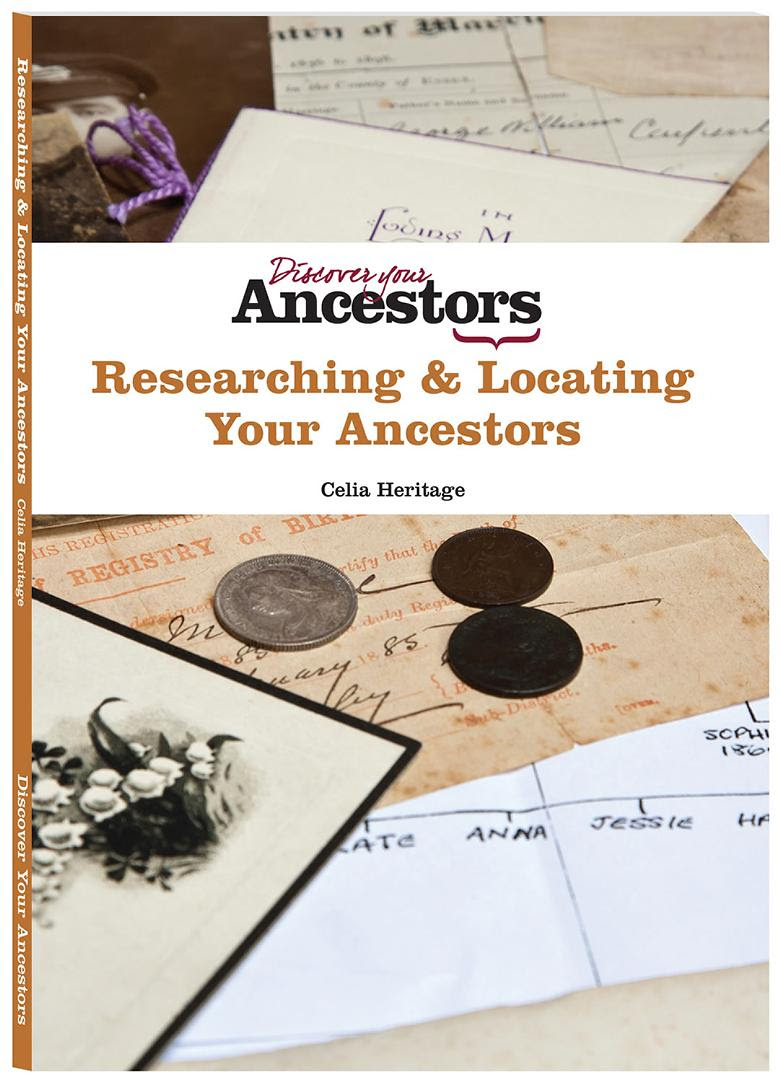 Pre-Order now and you’ll also receive “Researching and Locating Your Ancestors” by Celia Heritage, worth £9.95

Advance Order
(Due for release Jan 2016)

Deluxe genealogy software written by a leading UK software designer for the UK market. Allows you to enter your family by drawing a tree. Full support is given for sources, notes, facts and linked multimedia elements. For researchers it provides support for Queries and Reports. 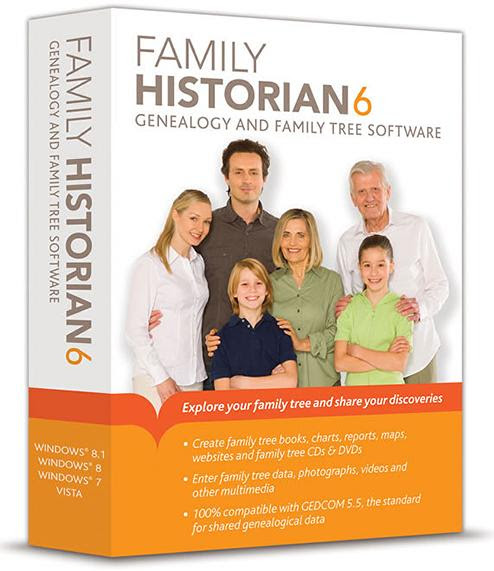 So while it may be annoying for those who have purchased and learnt how to use Family Tree Maker there are alternatives out there! 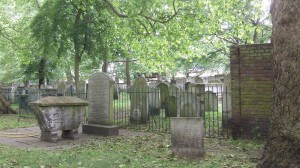 Have you searched for an ancestor’s burial and been frustrated by not finding them anywhere?

I know that I have!

For a very long time I couldn’t find the burial of my 2x great-grandfather and great-grandmother who had originated in Edinburgh and Fife respectively. They had, however, died in the English spa town of Cheltenham in the 1850s.

I had been shown a plaque, on the wall inside an Anglican church, that commemorated them; but Christ Church itself did not have a graveyard with any headstones. I discovered later that it was, in their time, a chapelry to the main St Mary’s Church – though later it would become a parish of its own.

Some years ago I checked with the local Family History Society, to see if they knew where my ancestors had been buried. I got a polite email back saying that they couldn’t find them in the records that they had available. I had gone down this route, as very often FHSs run small projects to transcribe records that don’t make it online with the main data websites on account of their limited audience.

Having drawn an initial blank in Cheltenham, and as my ancestors were Scots, I began looking in Edinburgh and Fife where many of their family were to be found in the various burial grounds there. It is often worth seeing if a lost ancestor has returned “home” after their death. Even if they haven’t done, there is always the possibility that they will be mentioned on a headstone of a family grave. I have found this especially happened when a spouse, or child, died abroad, though it can be simply in another part of the country that they are interned. In my experience, of looking at memorials in graveyards, I have seen a fair number of people that died and are laid to rest in India or other parts of the Empire, during the time these lands were under British rule, and then recorded on loved one’s memorials at home.

Returning to my brick wall in Cheltenham and still having not found my lost ancestor burials elsewhere, I thought about my options.

– First was to check the parishes in a radius around the area. For this I used The Phillimore Atlas and Index of Parish Registers Atlas (you can get a print copy of this book from S&N Genealogy Supplies)

– I would make a search of the National Burial Index

– On my next visit to the Society of Genealogists, in London, I could see what they had in their library 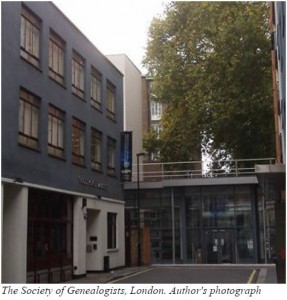 – If I travelled to the county I could go to the Gloucestershire Archives (the county record office for Gloucestershire) and search their collections to see if if I could find any other records that may help, though in the intervening years some have been made available on ancestry to search online.

In the end it was this last option of the Gloucestershire Archives records that solved the problem of where my ancestors had been buried. In the Bishop’s Transcripts I found that my great-great-grandfather was buried in Cheltenham’s New Burial Ground in August 1858, as was his wife in May 1851. Bishop’s Transcripts (BTs), a copy of the entries in the parish register and sent annually to the diocese by the parish, can be a really helpful set of records to use. This is especially when the original parish record has been damaged, lost, stolen or simply isn’t clear to read.

From a document that I also found at the Gloucestershire Archives, I discovered that there were 4 main burial grounds in Cheltenham.

– The first was the churchyard attached to St Mary’s Church

– The second was a burial ground opened nearby on High Street in 1831, although the churchyard continued to be used. This new burial ground had a small chapel – St Mary’s cemetery chapel, that later became St Mary’s Mission

– In 1864 the Civil Cemetery was opened at Bouncers Lane and both previous burial grounds were closed to new burials. Burials still took place in pre-purchased or used graves, i.e. a family grave

It is probably in the second burial ground that my ancestors were laid to rest. Unfortunately the area is now known as the Winston Churchill Memorial Garden and the headstones have been removed. I find this sad as I shall never be able to find their actual graves, but at least my brick wall has fallen and I know where they are buried.