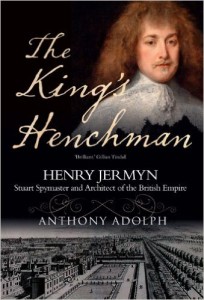 Charles II’s succession to the throne came at a time of national turbulence: his father had been beheaded, Oliver Cromwell had usurped his right to reign. England was at sea among Europe s constantly shifting allegiances. But Henry Jermyn, a Suffolk commoner, lover to the queen mother and possibly even father to the king, was there to keep the royal family together. Jermyn’s deft way of secretly manipulating government and raising an army almost prevented Civil War. He was instrumental in saving the monarchy and set in motion the rise of the British Empire. A duellist, soldier and spymaster, Jermyn was close to the great men of the 17th century: Francis Bacon (his kinsman), Louis XIV, Cardinal Richelieu, Inigo Jones, Samuel Peypys, Christopher Wren and Thomas Hobbes (whose Leviathan he inspired). The King’s Henchman is a story of love, family, regicide, adversity and last-minute escapes, set against the backdrop of bloody Civil War. It is also the remarkable love story of a commoner and a royal who together shared a vision for Britain and created St James’s Square and Greenwich Park as its first grand expression.