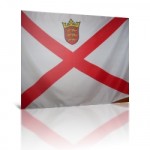 I was doing a bit of research, this week, on a person who had been part of an Army family that moved to Jersey in the Channel Islands, at the end of the 19th century from England.

From the 1891 census I could see that this young girl, aged 14, was listed as a Daughter and was living in the household of a Colour Sergeant and his wife in the Parish of St Saviour. By the time of the next census, in 1901, they had moved a few miles further east, within the island, to the Arsenal in the Parish of Grouville. The head of the household would seem to be listed as a Quarter Master Sergeant, on the permanent staff for the Royal Jersey Militia Infantry and his daughter as a Music Teacher.

Using the various online databases at The Genealogist.co.uk, Ancestry.co.uk and findmypast.co.uk, the next time that the daughter appears, in any of their records, was in the probate records for her mother back in England in the 1930s. From this we see that the daughter has married, revealing her new surname. But there seems to be no record for the marriage in any of the countries that make up the United Kingdom. Jersey and the rest of the Channel Islands are British Islands that are not, of  course, part of the U.K. and they have their own administrations and their own marriage registers.

None of the Jersey marriage records are online and so on one of my visits to the Lord Coutanche Library at La Societe Jersiaise, in St Helier, I took the time to consult their copies of the indexes to the island’s marriages. If you have read the guest post by James McLaren on this blog on Jersey BMD records after 1842 as part of the Jersey Family History Section, you will know that this is a somewhat lengthy affair as they are not kept quarterly, like in England, but are simply run until they are filled up. Indexing is alphabetical by the first letter of the surname only, being added to the list in the order that the marriages take place. Each parish runs indexes for Anglican and non-Anglican marriages and in St Helier, the town parish, each C of E church has its own index.

I was faced with the prospect of going through thirty or so indexes, looking for the chance marriage of this couple at some unknown date after the 1901 census. My best guess was to start with the Parish of Grouville, where she had been resident in 1901. Sadly, I had no luck and so I began the trawl through the different parish indexes until I hit St Helier.

There, in 1902, at the main Parish Church of St Helier, married by the Dean of Jersey, G.O.Balleine, was my research targets! It had taken me hours of persistence to find them and, with quite some satisfaction, I now noted down the details on my pad. I would need the Parish, the dates between which the index ran, the Page number and the bride and grooms names to obtain a certified extract from the Superintendent Registrar’s Office in the island, on payment of the required £20.  The time it had taken me to find them, however, meant that this office was now closed for the day. They are only open to the public on weekday mornings and then only when no civil weddings are taking place at the office.

The next day, however, I was able to request the certificate and collect it the day after. A speculative search had revealed the Jersey marriage of this couple in September 1902. A good result and another piece in the puzzle of this family’s research.

One Reply to “Jersey Marriage Records”