There are not many places where the contribution you make to property rates is public knowledge, but Jersey is one of them.

In Jersey rates are paid in two parts: one part is paid by the owner of the property (the foncier rate) and the other is by the occupier (mobilier rate). There are sets of rate books in both the Archive and the Coutanche Library covering about a century up to 1965, plus some more recent data as well (ask for Taxation du RÃ¢t) 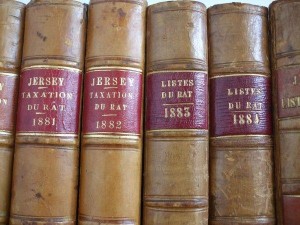 These arenâ€™t the easiest of documents to use, because the listing is an alphabetical list of ratepayers in each vingtaine (a vingtaine is a subdivision of a parish; the smallest parish (St Mary) has two, while St Helier has seven).

Ideally you need a detailed map of Jersey and a lot of patience â€“ but the listings can be very rewarding. They will indicate whether someone owns a property or not: they can also indicate something about the condition or size of the property (someone paying 5 quartiers of mobilier rates a year is going to be living more modestly than someone paying 20 quartiers a year. Itâ€™s also indicative, at least to some degree, if the person you are researching is not on the list of ratepayers â€“ that would indicate someone who was probably in a shared tenement and fairly low down the pile (because this became a lot less common as slum housing started to be replaced in the 20th century). Some of the parishes also published lists of people with dog and/or gun licences alongside their rates.

The existence of the rates books is also very handy in tying movement down. I knew that my wifeâ€™s family moved from one address to another between the 1891 and 1901 censuses: the fact that they suddenly started paying rates in 1896 or so pinpoints the move more exactly. Equally, my second cousins had a hotel in Grouville, but they disappear from the rate books in about 1905 â€“ only a year after the owner (to whom one of them was married) died.

Property owners have to acquire their property, and next time weâ€™ll be looking at what you can get from Jerseyâ€™s land registry system. Until then – Ã€ bÃ©tÃ´t!