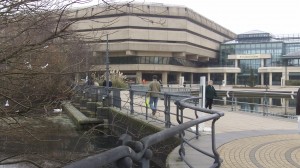 I’m just back from a flying visit to The National Archives at Kew.

Every time I visit TNA I get something out of it and today was no exception! I discovered the delights of records that are not available anywhere else to search.

I went along to research several different lines of enquiries, one of which was for an ancestor of mine who had given his profession on his son’s baptism as ‘tide waiter’. This is a type of customs officer who waits for the ships that come in on the tide and then checks them for contraband or goods that are subject to duty. He was in one of the census as a Customs Officer and has appeared as this in some family notes I received from a distant cousin.

My initial research using the Discovery search engine on www.nationalarchives.gov.uk had me confused. A few minutes with the help desk staff on the first floor reading room, however, pointed me towards the microfilms of the CUST 39/3 that are the records for the establishment at the different ports – basically the Staff Lists with details of staff employed by the Board of Customs.

I was able to spool forward to Plymouth, where my man was based and where in the 1851 census he was recorded as a Customs house officer. So if he had been a tidewater then his name would have been entered into the list of the Plymouth establishment. Alas, he was nowhere to be found which backs up my developing theory that he was an ‘Extra Gent’ (not on the establishment) customs officer and that he, or someone else, may have exaggerated a bit on his son’s baptismal record!

I then ordered up some Customs minutes books (CUST 28/199) and looked at any mention of Plymouth and names of Customs officers there. What I came away with was a much better understanding of the records and how,  if you are lucky enough to find your ancestor mentioned you can build a fair bit of colour to your family story. This would especially be true if your Customs Officer got himself into trouble. One of the original 1850s ledgers that I was able to thumb through was the Outport Records: Charges against Officers (CUST 66/217).

I didn’t find my ancestor mentioned in the book, but for those researchers who are able to find a forebear then it will be of great interest to them. The thick leather bound books with heavy bluish paper provide a fascinating insight into the discipline proceedings. The various cases are often recorded on the page verbatim. You can thus read the question asked by the Surveyor of the man before him and the answers given by the accused Tide Waiter. At the end you will find the verdict of whether the Customs Officer was to loose his job or not. All of which is written in the neat handwriting of a clerk from 167 years ago.

None of these records are digitized and so it is another example of why a visit to TNA can allow you to get to see records that just aren’t available elsewhere. So while I do a lot of my research online I always enjoy getting out to The National Archives, or a County Record Office, every now and again to delve into those records that are in their safekeeping but not digitized.