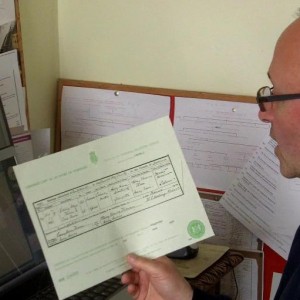 When you first start doing Family history research for British ancestors, It may appear to you to be a quite daunting task. There will be probably be frustration and elation often mixed in equal parts as you find a forebear and then lose trace of them again. There are so many avenues for you to go down and so many records to look at in Britain which means that, given time, you can probably get back on track and those ancestors that disappear may reappear later. Not being able to find a person can be the result of many things. The ancestor may just be hidden within the database because somebody has lost the record, or it has been damaged, or simply your ancestor’s details were mis-entered in the first place.

The best bit of advice that I can pass on is some that was given to me a number of years back. It is a recommendation that can be applied to any task, really.

“Tackle the subject of researching for your British ancestry by taking it in small bites at a time.”

Perhaps the first tools to use are:

In truth, all of the above records should be used together so that you can corroborate the details. A census may give you a place of birth different from the actual place found on the Birth Certificate because your ancestor, for some reason best known to themselves, wanted to claim a different place of birth from the actual town where they were born. Ages in census may have been given wrongly for a variety of reasons – not the least of which is that some did not really know!

It is vital to start your family tree research from the latest provable fact. This could be your parent’s details, your grandparent’s or perhaps your own birth certificate.

Now I realise that people that have been adopted, or for some other reason are not aware of their biological parent’s names or details will struggle with this. There is an article republished in the resources section of my website that can help you if you are in this position. Take a look at: Finding biological parents