If you have Welsh ancestors then the chances are that you already know that up until the 19th century in a number of the more rural areas the Welsh tended to use the ancient Patronymic naming system.

This is where the offspring from a marriage would mostly take their Father’s forename as their surname. I have added the word ‘mostly’ in the last statement as on occasions there have been cases where it was the mother’s name that had been passed on as a second name. Matronymic surnames, however, are far less common than patronymic last names.

Because of this tradition of using the Patronymic, or Matronymic for one’s child, surnames were not fixed and would change from generation to generation. For example, if Thomas JONES had three sons, Thomas, William and David.
The three sons may have gone by the names of:
Thomas ap Thomas or Thomas Thomas Jones;
William ab Thomas or William Thomas Jones;
David  ab Thomas or David Thomas Jones;

As a general rule an ‘ap’ or ‘ab’ was added between the child’s name and the father’s name. In the example, David ab Thomas is David “son of” Thomas. For a woman’s name, the word ferch or verch (often abbreviated to vch), meaning “daughter of”, was used.

As with any rule, you may not be surprised to learn that there were many exceptions to it. Your Welsh ancestors could well have dropped the ‘ab’ or ‘ap’ altogether. In the case of a David, son of Owen Thomas, his name may well have used the simple name of David Owen. Other exceptions are where your ancestors decided to drop the ‘a’  from ‘ap’ or ‘ab’ and just attach the remaining ‘p’ or ‘b’ to the father’s name. For example, ‘David ab Owen’ could have been known as ‘David Bowen’. 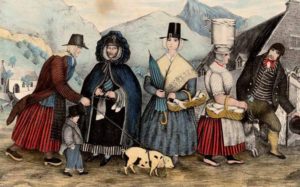 In dealing with patronymic names, the researcher needs to bear in mind that the absence of ‘ap’ or ‘ab’ does not mean the family adopted a permanent surname. In south Wales particularly, patronymic surnames appeared without the ‘ap’ or ‘ab’.

By the later years of the Middle Ages the patronymic system was gradually being replaced by fixed surnames. Although the use of patronymic names would continue to be used by some right up until the early 19th century in some rural areas.

When your Welsh ancestors started to fix their surnames then all their descendants used the same surname. In our example, all of David Thomas’s descendants now took the surname THOMAS and all David WILLIAM’s descendants had the surname WILLIAM OR WILLIAMS.