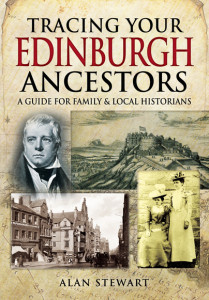 If you have Scottish ancestry and begin to trace your family history from that country, then you will rapidly discover that it is quite different in many ways from tracing your forebears elsewhere.

Some years back I began to look into a side of my family that was from Scotland, although at the time I had no idea which part they came from. Quickly, I found, some of their roots were in Midlothian and also in the City of Edinburgh where they appeared to be merchants.

Following them further back in time I found that they were descendants of the lairds of Hope, an estate in the hills to the south of Edinburgh. To my delight, I found the first laird of Hopes marriage in the Scotlandspeople records for Kirk of Halyroodhous (sic), Edinburgh in 4 August 1664. I then discovered a privately published book about the family in the Society of Genealogists Library in London and this gave me a line of ancestors to follow on a visit to Scotland.

As I have been thinking about doing more research on this branch of the family I was, therefore, very happy to recently get my hands on the book by Alan Stewart called Tracing Your Edinburgh Ancestors published by Pen & Sword.

I learnt a huge amount about the local history of Edinburgh from this book, as well as discovering where to look for records pertaining to the City and its villages. Alan Stewart combines a great deal of the ancient history of the area as well as modern historical information and the all important genealogical data and where to look for it.

Part one of the book explains the history of Edinburgh from the volcanic activity, that is responsible for its geography, through the Ice Age and the Romans to the setting out of the Old Town and the New Town. From reading this book I now understand the way Edinburgh spread and how it incorporated Leith and the surrounding villages into its borders.

From the second part of the book I was able to build my understanding of the family history records, that can be used to trace ancestors from the area. The explanations of the differences in them, when compared to their English and Welsh counterparts, clarified a great deal for me. Out of the chapters, in part two, I would just like to highlight how useful I found the sections on wills and inheritance records, to make sense of my own research into my Edinburgh folk. Now I understand what a Sasine record was. I had previously seen mentioned, in the privately published family history book I had found in the Society of Genealogist Library, that one of my ancestors, Edmund Hay of Hopes, obtained his lands in 1653 from his father according to a sasine dated that year. Alan Stewart’s book has made it clear what this is and that they have been digitised and are available to view on “virtual volumes” at the National Records of Scotland.

Tracing Your Edinburgh Ancestors by Alan Stewart has much more to recommend it to the researcher of Edinburgh family. It is available as a paperback, a kindle book or an ePub book