If you caught the BBC TV programme Who Do You Think You Are? this week then you too were treated to a really interesting story.

It was that of Billy Connolly and in particular his ancestral links back to India.

His maternal great-great-grandfather was a soldier in British India who married the daughter of another British soldier. One who had seen the atrocities of the Indian Mutiny first hand and who himself was married to a young Indian girl at the time.

The Anglo-Indian aspect is another fascinating subject that could be examined in detail, but today I wanted to concentrate on the 1857 Indian Mutiny, as the British called it, or the First War of Indian Independence, as it is known to Indians.

What was good about this episode of the TV series was that it explained a bit about this historical time. There were brutal killings on both sides and it reminded me to go and look in my notes for an inscription that I had once seen on a headstone in one of the old cemeteries here on the other side of the world in Jersey, Channel Islands. There is no connection to Billy Connolly other than it is a person who also witnessed the brutality that his ancestor had in Northern India and the effect that it had on her.

Last year I was looking at some of the old Victorian monuments in Mont A L’Abbe Old Graveyard in Jersey when I came across this one:

Granddaughter of the above Mary Symons and the beloved wife of Captain W.J. Hicks H.M.E.I.S, who died at sea on her homeward voyage on the 28th of April 1858 in the 19th year of her age. Her constitution having been destroyed by the suffering she experienced during the mutiny at Allahabad.

So many other questions spring to mind from this. 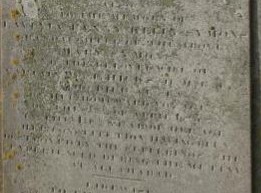 This particular headstone can be viewed in its entirety as part of the Diamond subscription of TheGenealogist. This site has published photographs and transcriptions from several churchyards and cemeteries and I am told by my contacts at TheGenealogist that there are more to come in the future months.

Just search for Lavina Hicks and you can see the actual headstone that I was so moved by.