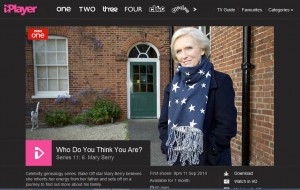 This week’s Who Do You Think You Are? on the BBC was a bit more traditional in tracing Mary Berry’s family back through various record sets. From what I can see, on the forums and on facebook, this has please many people who don’t like the recent trend of just one ancestor being looked at in a programme in more depth.

I have to say that I really enjoyed this week’s, with Mary Berry being a great choice to investigate with some interesting  ancestors that made use of a large number of resources from the family history researcher’s tool box.

In defence for those other programmes, with the single subject, I would just like to say that one of the points that I was taught (and which I myself now teach in my own family history course) is that family history involves looking at the social context of our ancestors, as well as collecting names, dates and details.

We need to understand the world in which our ancestors lived and what was happening to make them be the people that they were. Perhaps these editions were simply trying to show this and in the confines of an hour long programme this naturally excluded all the other generations that  would appear on the celebrity’s family tree.

That said, it would seem that the popular vote is for the later type of WDYTYA? Viewers from the genealogy pages on facebook  would prefer to see a family tree being traced back and a little bit of detail being fleshed out on the poor unfortunate person who had fallen on difficult times or who had shown great grit.

As long as when we come to research our own family tree that we don’t make the mistake of simply collecting names, dates, perhaps an occupation and place or two and then move on to the next generation without thinking a little about the social context of our ancestors, then my vote is also with the Mary Berry type of programme, but only narrowly in favour!

As I wrote this post today I was casting my mind back over the show and counting off the data sets and resources used for which I have modules in my Family History Researcher course.

There was her ancestor who was the baker with the contract for supplying bread to the Workhouse and the Outdoor relief paupers (not really made clear in the programme as to what each were, probably because of time constraints). My module on the Poor Law explains the difference between indoor and outdoor relief.

There was also Christopher Berry Junior’s wife and 6 children who ended up in the workhouse with some of the children dying while inmates, but the segregation that would have taken place between children and parent was not mentioned. See my module on the Workhouse.

Mary Berry was shown the Trades Directory and especially the one that her ancestor had published. In my course I have a module on Trade Directories written by Mary Bayley of TheGenelogist that uses that website’s great resources to explain their usefulness to the family historian.

Mary Berry had an ancestor of the same name as her who was identified in the GRO vital records as having had a number of illegitimate children. The Parish Registers also confirmed this fact. I delve into these three areas in separate modules on the Birth Marriage and Death certificates (lesson 2), the Parish Records (5 and 8) and Illegitimate children (21).

If anyone is new to our fascinating subject, or is a seasoned family history researcher who would like to be refreshed on English/Welsh researching then I have a £1 trial for two weeks on offer at the moment. 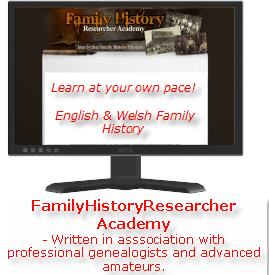