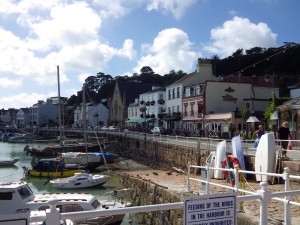 I was back in the area of Jersey where I grew up today.

It was not my family history that I was researching, but ancestors belonging to someone else.

I had received a request to take a photograph of the house in which my contact’s forebears had lived and so I went to my computer and opened TheGenealogist.co.uk and looked up the head of the household in their Channel Island records.

This site has some “Jersey Almanacs” which are very useful trade directories for the islands and soon I was on the trail.

The Genealogist also has the full run of census data and images, which I next used to quickly find the person in question.

Unless you are new, to family history research, then you will be aware that the census collections are also available on Ancestry and Findmypast as well. I tend to use all three sites, as sometimes the transcription on one may help me better locate a person with a difficult name spelling.

In the 1901 and 1911 census it was quite plain that the family in question lived around the harbour at St Aubin, in the parish of St Brelade. The census in each case clearly gave the name of the house, though it was different in 1911 from 1901 so there was the possibility that the family had moved a very short distance. Either that or they had changed the name of their house.

So a simple task, you may think. All I had to do was pop along to the road in question and snap a building. Even if the house name was no longer visible, or had changed, there was bound to be a property in the road that had retained its name and I could use as a reference point. All I would need to do is count down the houses from that one.

Oh that it was so easy! You see the harbour front has some alleyways off it and these had different road names today from the ones used in the census. It seems to me that the parish has gone back to using the older French names for these roads from the Anglicised ones used in 1901 and 1911.

Another problem was that off these alleys were some semi-detached cottages, some of which are reached via foot paths. Also there were a set of steps, leading up to the steep Market Hill that rises behind the harbour, on which three more un-named cottages perched.

Both of the census records ignored the Methodist Church, that sat in the middle of the harbour frontage between one of my reference properties, as is to be expected if it had no residents to be counted. But it was also obvious that, in times past, some of the other buildings would have been warehousing, or other uninhabited commercial buildings and so these too were not enumerated. This made my task of counting down the houses to the ones for which I was searching, difficult.

I consulted the “Description of the Enumeration District” as in some cases this can give you a good idea of the enumerator’s walk. In this case it mentioned the names of the roads, in general, but did not explain how he had dealt with buildings set behind each other or to the side.

By finding some more reference buildings, that is those that have retained their names through to today, I was able to tie down the house in the 1901 to being on one plot. I am not certain that it is the actual building as it may well have been built later, it not having many of the period features of its neighbours to give away its age.

So only a partial victory for family history research this week, but the Description of the Enumeration District can be a useful tool elsewhere and browsing through a road on the census can often be illuminating in other ways. Sometimes you may find more members of the family living close by and a child missing from one house in its grandparent’s or Aunt and Uncles. I remember finding this in my own family in Plymouth.

Disclosure: Compensated affiliate links used above when discusssing the resources of: