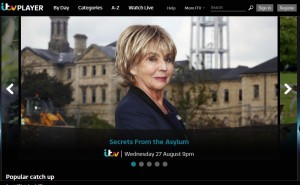 Last night’s ITV programme on Secrets from the Asylum was fascinating from a family history point of view.

It showed vividly how emotional a finding that one or other of your ancestors spent some time, or indeed died, behind the doors of an asylum can be.

One of the things that I always advise people, thinking about researching their family tree, is to be aware that they may find skeletons in the cupboard. Also that once the skeleton is out this can cause other members of your family to get upset with you for opening the door into the past. Its particularly difficult if you dispel a carefully constructed family story that has been woven to protect the family from a perceived disgrace.

Another maxim, that I tell people new to family history, is not to judge their family for making up these stories and to try to understand your ancestor in the era in which they lived and in the social context of their times.

Both these “rules” had to be applied when I found a cause of death for a client whose family tree I was researching. Just like Christopher Biggins, one of the celebrities on the show, he to discovered that his ancestor died from “general paralysis of the insane”.

The client’s ancestor was said to have fallen from his horse as a relatively young man. My client had become suspicious of this story, perhaps subconsciously having picked up that the received wisdom was not told convincingly enough. His theory, however, was that his ancestor had perhaps run away from his wife and family. The truth was more of a shock when the certificate was delivered to him by me.

In the programme last night actress Sue Johnston was also featured as she revisited the hospital where she had worked in the 1960’s. Her experience was of wheeling patients down to have Electro Convulsive Therapy (ECT), which was invented in the 1930s to treat schizophrenia but was used on a variety of illnesses by the 1960s. Her memories of the patients getting the treatment were quite distressing for her.

I have found people who had this treatment and went on to live normal lives but for researchers who discover this in their family tree, this can sometimes be upsetting.

So, as long as you are aware that not everything that you may find out about ancestors will be “rosy” then family history research is a compelling pastime that gets better with the more records and resources that you can get to use.

If you are just starting out and want to build your knowledge of English/Welsh family history so that you are able to track down elusive ancestors then take a look at my course at Family History Researcher Academy.

For another couple of weeks I am offering my Summer Sale of a month’s trial for free in conjunction with S&N Geneology Supplies! Click the image below.