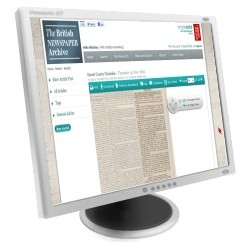 I have been having a nose around the British Newspaper Archive Collection again this week on its stand alone website as well as its home within the findmypast site.

I was looking for information on a great-great-uncle who died young (30) after a fall from a cliff. While I didn’t come up with a family notice of his death I found an article in the Isle of Wight Observer for May 19th, 1866 under the notices for the Royal Victoria Yacht Club that I found interesting.

After detailing that the Commodore’s splendid yacht had arrived at the station on Tuesday and then listing the twelve yachts on station, having got the important notices out of the way they then add a line or two about the man I was researching.

“It is with great regret that we hear that W.W.F.Hay esq., fell overboard from his cutter yacht the Surge, at Alderney, and lost his life. His remains will be interned tomorrow (Saturday). On receipt of the melancholy intelligence, the flag at the club was hoisted half-mast high.”

Well, their information was not quite correct, as reported elsewhere. William Wemyss Frewen Hay died when he went ashore at Alderney to have dinner with the officers at the garrison there and lost his footing while returning to the breakwater and where his yacht was anchored.

This, however, got me looking for information on the clipper yacht called the Surge and the first article I turned up made me think that she was not such a good racing boat at all. She retired from a race around the Solent having no chance of gaining the lead in August 1865.

Further articles, however, have her mentioned in a good light.. “Some dozen clippers have already been entered including the celebrated Surge (W.W.F.Hay Esq), the Water Lilly, yawl, (Commodore Lord A Paget, MP.) etc” which does not sound like she was an also ran.

I wonder what the yacht looked like and how many crew she required to sail her?

There are also other questions I have about Willaim, who at the time of his death in the May, according to another article, was due to be married in July of that same year. I would like to find out who his bride to be was, but so far no mention of the lady has appeared in my trawl of the newspapers.

As more titles are added all the time this situation may indeed change. I keep coming back to this resource as it is so useful to family historians.

Disclosure: The above are compensated affiliate links.