Those of you with merchant seamen in the family are probably aware that only some records have been kept by the National Archives. Luckily for me the ones that I needed to access, for my father who had been a WWII merchant seaman, were kept there.

I was asked by my father, over Christmas, if I could find out for him exactly when it was that he went to sea, back in the second world war. He was a very young man and can remember having his first birthday, in the service, at sea one May in the 1940s.

With the passing of the years he has a sketchy recollection of his training period and can not remember exactly how long it was before he joined a merchant ship on the convoys across the Atlantic and also sailing in the Pacific to Australia and New Zealand.

The ship he joined acted as a troop ship in the war, armed with a single gun manned by an army contingent. It had been built as a passenger liner in peacetime and was fast having four screws. 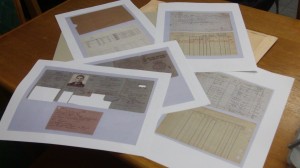 In my last article I referred to my trip down to The National Archives at Kew in search of his service records where I had to wait for the staff to view the documents and blank out any personal detailsÂ  before I could view a copy. The process took longer than the time I had and so they had promised to post me the copies when it had been completed.

Well the documents from TNA arrived this week and I now have my father’s merchant seaman’s’ pouch and his wartime service records as he sailed the oceans!

At Kew I had been advised to look at the series BT 382/1799 which was the Registry of Shipping and Seamen: Fifth Register of Merchant Seaman’s Service (CRS 10 forms). Part 1: European origin mainly. Series 1, mainly of European origin, mainly 1942-c1965. Thon Hans Christopher to Thorne N B. for his records.

This has indeed given me the dates of his engagements and discharges for each voyage and so I can now tell him the first date that he went to sea in his war service.

As to the most interesting document from my point of view? This would be his British Seaman’s Identity Card, complete with a contemporary photograph of him aged 19, from his seaman’s pouch as held by TNA.

Sign up for my free Tip of the Week and get a weekly email from me with helpful tips for English and Welsh family history research.