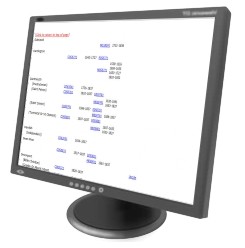 I was taking my research, of a branch of my tree that I have never really looked into before, a stage further.

It was the family of the Master Mariner that I had identified in Findmypast’s records of merchant navy records online that I looked at last week. I had traced back my 2 x great grandparents to their marriage in Portsmouth in 1859 and found that her family were living in that maritime city at the time of the 1851 census. Having failed to identify them in any of the other census from the UK, I then took a look at the LDS familyserch.org website to see if I could find marriages and baptisms for the parents. Now the results here were equally sparse. I did, however, find a marriage in St Thomas’ church Portsmouth for what I believe to be my great-great-great grandparents. From the census of 1851 I had got the Christian names of the family unit and my 3x great grandparents appeared to be called John Malser and Rosanna Craydon and John was born in 1811.

I thought I was on track until I tried to research back these families in Portsmouth. At present I have no leads from the online websites for the Craydon branch. What I did find was a possible baptism, from some Hampshire Genealogical Society transcriptions on the findmypast website for St Thomas’ Portsmouth. This gives the baptism date as being 1809 and so I can not be sure that I have found the correct man, but he is certainly a possibility.

We are all aware, in the family history community, how dates of birth in the census records can often be recorded incorrectly. This is where the subject wishes to massage their age slightly for some reason, simply doesn’t know their age, or in the case of the 1841 census the age is rounded down to the nearest five years for anyone over 15. Likewise we know that errors creep into transcriptions when they are copied and so that information contained within them may not be correct. So what I am left with is a tentative branch to my tree that awaits further investigation by looking at original, or at least microfilm copies of, parish records when I am able.

Before leaving this new line I decided to enter my newly discovered ancestors into a search engine. I quickly found a family tree that showed a link from the Malser’s to my parental family line, the Thorn’s. Here, however, it claimed my 2 x great grandmother was the daughter of a differently named set of parents from those that appear in the one census return that I have found. If I had done my research the other way around and had decided to put into my tree the information that was published on another’s tree without checking to a primary source, then I could have unintentionally introduced errors into my tree. As it is all I have is some leads that also need to be checked against the primary source, when time allows, but at least I have one census that has sent me in the right direction.

The names on that other tree could be different for all manners of reasons. They could be nick names, a case of remarriage or just plain wrong. Always check your ancestors back to a primary source before you can be confident that you have found your family.