As many of us find out, when we start to research our family history, our forebears can be a mixture of characters who can come from different walks of life and backgrounds.

In my case I have agricultural labourers, small businessmen, carpenters and brass-founders. There are mariners, soldiers and an intriguing line that “lived on their own means” and are descended from Scottish nobility, albeit in some cases, from the “wrong side of the blanket”. 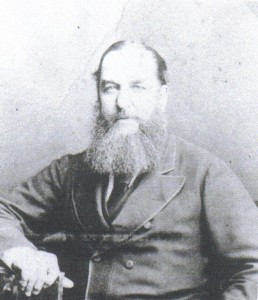 One of these ancestors, who has always interested me, is a 2 x great-grandfather who appears on the various census as not having an occupation other than owning houses and funds. I had traced Charles Crossland Hay back from Cheltenham in England, where he died in 1858, to his birth in Dunbar in Scotland in 1797 the son of a merchant, who was also called Charles Hay, and his wife Mary Ann Stag. Charles Hay senior then moves his home to Edinburgh and then I pick up the son, Charles Crossland Hay, living at Auchindinny House, near Lasswade, before he marries his bride from Fife in 1832.

Over their life together they have seven children. Two of which are born in Scotland with four born in England and the seventh, my great grandfather, born in France. This last child is registered as a British subject and is christened in Lasswade, back in Scotland, and so his details were to be found on the ScotlandsPeople website.

With the recent launch online of The British Newspaper Archive at http://www.britishnewspaperarchive.co.uk/
I have, at last, gained more information that has allowed me to find out more about the business of my 2x great-grandfather, through a report on the tragic death of one of his other sons: William.

William Wemyss Frewen Hay died at the age of 30 from a fall over the cliffs in Alderney on a visit to the garrison there. In the newspaper article it stated that he was the son of the late Charles Crossland Hay of the firm Hay, Merricks & Co of Roslin. 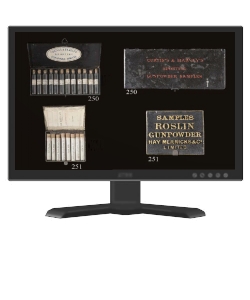 Now I could start using the search engines to find out about the company, but first of all I did a search of the newspapers for the business. I was rewarded by finding advertisements for their “Sporting Gunpowder” in papers from all over the country.

I went on to find samples of the gunpowder for sale at Christie’s and books mentioning the products digitised and on Google books.

Looking at a map I could also see that Roslin is but a stones throw away from Auchendinny and from the Lasswade parish church, so explaining the family’s link to the area.

On Google Books, I came across a Report from the Select Committee of the House of Commons in 1837-8 dealing with the effect of fictitious votes in Scotland after the Reform Act brought in by the Whigs. There is a list of voters and how they voted included in the document, something that would be unthinkable today. The four business partners of Hay, Merricks & Company of Roslin Powder Mills, which include Charles Crossland Hay, are all recorded as being voters for the Whig party in the years between 1832 to1850 at Roslin.

So now I have ascertained that my ancestor voted for the Whig party and was involved in the manufacture of gunpowder and all this has flowed from a newspaper report into the horrific, slow, painful death of his second son William in 1867 on Alderney, and who was actually born in 1836, two years before the report on fictitious votes was published.

What this shows me, is how events that occur at different points in a timeline and which get reported, can so easily unlock brick walls that occur at other times in the timeline.